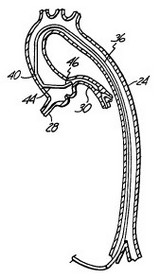 Jan Voda, an Oklahoma medical doctor sued Cordis for infringement of his patent on an interventional cardiology catheter. Voda had obtained patents both in the US and abroad. Not wanting to waste time and money on multiple suits, Voda asked the US court to also determine his claims of foreign infringement based on his patents in the UK, Canada, France, and Germany.  The US court agreed, but Cordis appealed — arguing that the district court improperly extended its jurisdiction.

In many cases, supplemental jurisdiction has been found to extend to include foreign law claims. However, the “so related” portion of the statute has been interpreted to require that the supplemental claims arise from a “common nucleus of operative fact” and that the claims would “ordinarily be expected to [all be tried] in one judicial proceeding.”  Here, the CAFC did not determine whether supplemental jurisdiction exists because it found that the district court had abused its discretion (see below).

Like the Paris Convention, nothing in the PCT or the Agreement on TRIPS contemplates or allows one jurisdiction to adjudicate patents of another. . . . Based on the international treaties that the United States has joined and ratified as the “supreme law of the land,” a district court’s exercise of supplemental jurisdiction could undermine the obligations of the United States under such treaties, which therefore constitute an exceptional circumstance to decline jurisdiction under § 1367(c)(4). Accordingly, we must scrutinize such an exercise with caution. . . .

The territorial limits of the rights granted by patents are similar to those conferred by land grants. A patent right is limited by the metes and bounds of the jurisdictional territory that granted the right to exclude. Therefore, a patent right to exclude only arises from the legal right granted and recognized by the sovereign within whose territory the right is located. It would be incongruent to allow the sovereign power of one to be infringed or limited by another sovereign’s extension of its jurisdiction. Therefore, while our Patent Act declares that “patents shall have the attributes of personal property,” 35 U.S.C. § 261, and not real property, the local action doctrine constitutes an informative doctrine counseling us that exercising supplemental jurisdiction over Voda’s foreign patent claims could prejudice the rights of the foreign governments.

. . . Because the purpose underlying comity is not furthered and potentially hindered in this case, adjudication of Voda’s foreign patent infringement claims should be left to the sovereigns that create the property rights in the first instance.

Judicial Economy: While the CAFC agreed with voda that “consolidated multinational patent adjudication could be more efficient,” the court worried that it would also cause additional problems of confusion and difficulty understanding and enforcing foreign actions.

In addition, we emphasize that because the exercise of supplemental jurisdiction under § 1367(c) is an area of discretion, the district courts should examine these reasons along with others that are relevant in every case, especially if circumstances change, such as if the United States were to enter into a new international patent treaty or if events during litigation alter a district court’s conclusions regarding comity, judicial economy, convenience, or fairness.

17 thoughts on “Voda v. Cordis: Plaintiff May Not Assert Foreign Patents in US Courts”