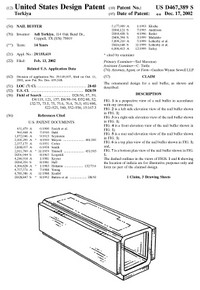 Judge Moore in the Majority: Egyptian Goddess owns a design patent covering an ornamental fingernail buffer design. (U.S. Design Patent No. 467,389). As is standard for design patents, the patent claims “the ornamental design … as shown and described.”

Satisfaction of the ordinary observer test requires proof that an “ordinary observer” would think the accused design as a whole is substantially the same as the patented design — thus creating some customer confusion.

Satisfaction of the points of novelty test requires proof that the accused device incorporates the “points of novelty” that distinguish the patented design from the prior art.

The real hurdle for most patent owners is the points of novelty test. Here, Egyptian Goddess listed four points of novelty — (1) an open hollow body; (2) square cross-section; (3) raised rectangular pads; and (4) exposed corners. Each of these elements are found in the prior art and thus do not server as individual points of novelty.

Interestingly, there is one point of novelty that might not be found in the prior art — a fourth side without raised rectangular pads. However, that point of novelty could not be used in the infringement analysis because all four sides of the accused Swisa product included raised pads. (This example is useful for thinking about the difference between the point of novelty test of infringement and the tests for invalidity based on anticipation and obvousness.)

Judge Dyk dissents: Judge Dyk argues that the concept of a ‘non-trivial advance’ is antithetic to the notion of ‘points of novelty’ — essentially creating a new obviousness test.

24 thoughts on “Design Patents: Novelty Requires “Non-Trivial Advance Over The Prior Art””