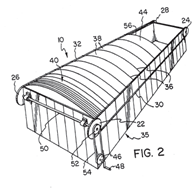 Sundance sued Demonte for infringing its patent on a retractable truck tarp. A jury found the patent infringed but obvious. In a post-verdict judgment, the Judge vacated the jury’s obviousness determination – finding the patent not invalid.

Patent Attorney Expert Testimony: On appeal, the Federal Circuit found that the Michigan district court erred by allowing a patent attorney – Dan Bliss – to testify as an expert witness on the issues of infringement and validity on behalf of Demonte. At least some of his testimony focused on issues “exclusively determined from the perspective of ordinary skill in the art” even though he was not qualified as an expert in the art of tarp-making.

With Mr. Bliss’s testimony excluded, the Federal Circuit was left with no expert testimony supporting the jury’s obviousness holding. However, following the Supreme Court’s lead in KSR v. Teleflex, the Federal Circuit still felt competent to determine the obviousness on its own. Explaining the appellate court’s competence, the opinion noted that the “technology is simple.”