Of the roughly 160,000 utility patents issued in the past year (June 29,2008 – June 29, 2009), about 37% were examined by an assistant examiner with the remaining 63% handled by primary examiners working alone. This proportion varies according to Technology Center.

For applicants who appreciate delay, patents that were handled by assistant examiners are more likely to be eligible for patent term adjustment due to patent office delay. (This results hold true for each technology center). 80% of patents handled by assistant examiners were awarded some PTA while only 72% of those handled solely by a primary examiner. This translates to an expected PTA of 12 months versus 9 months respectively. 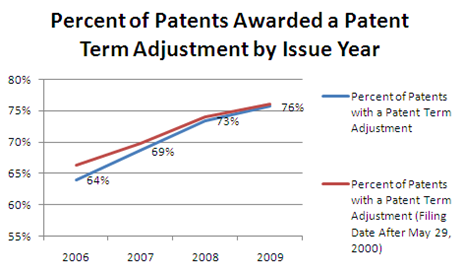 The purpose of the patent term adjustment provision in the AIPA was to guarantee that diligent applicants would still have a patent term of at least seventeen years from grant under the twenty-year patent term system. If the USPTO issues the application within three years from its filing date, any patent term adjustment operates to overcompensate the patentee. PTA should be limited to the situations in which the USPTO delayed processing or examination of the patent and this delay resulted in the application pending before the USPTO for more than three years." Via USPTO