Patent families continue to grow. With the increasing popularity provisional patent applications, most issued patents now claim priority to at least one prior patent filing. I created a database of all priority claims for non-reissue utility patents issued February 14, 2006 – February 17, 2009 (Pat. Nos. 7,000,000 – 7,493662). In fact, only 31% of the patents have no listed priority claims. For the graph below, I looked at the earliest listed priority date (one for each patent) and then categorized those according to the type of priority claim. 40% of the earliest claims were to foreign patent filings, and 18% claimed earliest priority to a provisional patent application. The remaining 11% earliest priorities reached back via US continuations, divisionals, and continuations-in-part (CIPs). 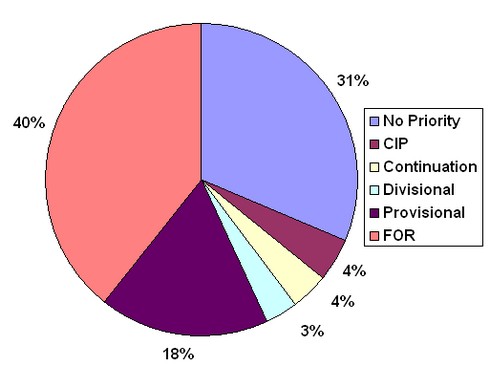