The construction of patent claims plays a critical role in nearly every patent case. It is central to evaluation of infringement and validity, and can affect or determine the outcome of other significant issues such as unenforceability, enablement, and remedies. Yet jurists and scholars have long lamented the challenges of construing patent claim terms. The Federal Circuit’s en banc decision in Phillips v. AWH Corp., 415 F.3d 1303 (Fed. Cir. 2005), stands as the most authoritative decision on claim construction doctrine. But while putting to rest various controversies, many core tensions in claim construction persist. Moreover, the decision itself does not provide a step-by-step approach to construing claims. This commentary provides a structured road map.

Prior to the en banc Phillips decision, the Federal Circuit doctrine on whether extrinsic evidence could be considered and what role it should play shifted significantly. From 1996 until 2002, consideration of extrinsic evidence beyond educating the court about the technology was heavily disfavored. See Vitronics Corp. v. Conceptonics, Inc., 90 F.3d 1576, 1583 (Fed. Cir. 1996). But nearly contemporaneous decisions cautioned against such a strong reading. In 2002, the Federal Circuit appeared to elevate dictionaries, a special category of extrinsic evidence, to a central role in claim construction. See Texas Digital Systems, Inc. v. Telegenix, Inc., 308 F.3d 1193 (Fed. Cir. 2002). Within a short time, however, the limitations of this approach became apparent.

A Structured Approach to Claim Construction: Two Stages of Analysis

Step 1: Is Construction of a Claim Term Required?

The following chart decomposes this inquiry. 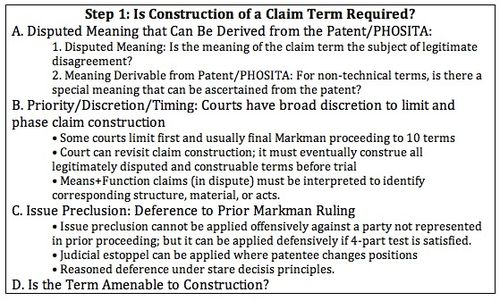 On the latter issue, it is useful to distinguish among three potentially overlapping general types of claim terms: 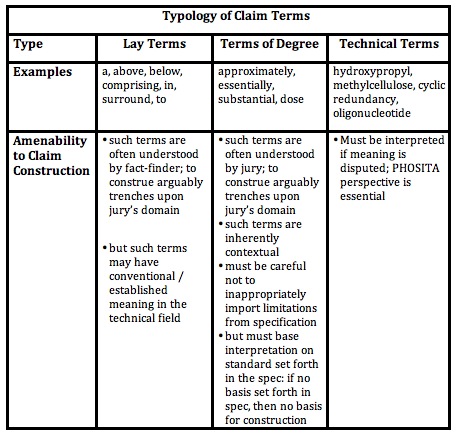 As reflected below, the three types of claim terms are not mutually exclusive and the question of which category is most appropriate will not always be evident based solely on a reading of the claim. The intrinsic record is critical to making this assessment. 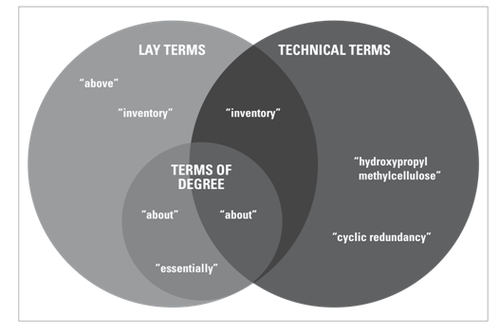 Once it is determined that claim language must be construed and is ripe for construction, the court must then apply the various substantive rules to the claim language to arrive at the proper construction. Before discussing the disputes that commonly arise in claim construction, it will be useful to state the principles that are generally not in dispute.

A “bedrock principle” of patent law is that “the claims of a patent define the invention to which the patentee is entitled the right to exclude.” Courts must interpret claims from the perspective of “how a person of ordinary skill in the art understands a claim term,” in the context of the patent. This frame of reference “is based on the well-settled understanding that inventors are typically persons skilled in the field of the invention and that patents are addressed to and intended to be read by others of skill in the pertinent art.” Often, other evidence will provide context for characterizing the person having ordinary skill in the art. Courts look to the meaning that the term would have to a person of ordinary skill in the art “at the time of the invention, i.e., as of the effective filing date of the patent application.” The “effective filing date” is the earlier of the actual filing date or the filing date of an application from which priority is accorded. This is quite significant because the meaning of scientific and technical terms can change significantly during the life span of a patent. Litigation over patent claims can occur multiple technological generations after the patent claim term was drafted.

Claim interpretation is highly context-dependent. The person of ordinary skill in the art “is deemed to read the words used in the patent documents with an understanding of their meaning in the field, and to have knowledge of any special meaning and usage in the field.” The meaning that this person would give to claim language, after having considered the intrinsic and extrinsic evidence, is the “ordinary meaning” of the claim terms. This ordinary meaning is considered to be the “objective baseline” for claim construction. Interpreting patent claims thus requires the court to consider “the same resources as would that person, viz., the patent specification and the prosecution history.” The patent and its prosecution history “usually provide[] the technological and temporal context to enable the court to ascertain the meaning of the claim to a person having ordinary skill in the art at the time of the invention.” Thus, patent claims are to be interpreted in light of this “intrinsic” evidence (i.e., the patent specification and its prosecution history) as well as pertinent “extrinsic” evidence (i.e., evidence showing the usage of the terms in the field of art).

Focusing on “ordinary meaning” has other shortcomings. The term “ordinary meaning” tends to drive the claim construction analysis to the meaning of a single word, or at most to a short phrase. But atomizing the dispute down to a word, or a short phrase, often does not make sense. Most patent disputes go to the overall approach of a patent claim, and focusing on a single word tends to lose the forest for the trees. When the overall approach of a patented invention is the central issue in a patent case, there may be no “ordinary meaning” that attaches. Trying to boil down the overall approach of an invention to a few selected words often misses the point of the dispute. There is a real danger that resolving a dispute over the meaning of a particular claim term will be mistaken for a resolution on the merits of a more fundamental infringement or validity dispute.

A more simple and useful description of the claim construction process starts with the “initial understanding” of claim language. This is the understanding that comes from the first reading of the claims, and from getting a sense as to what the patentee is trying to claim. This “initial understanding” may be focused on a particular claim term of interest, or may take into consideration larger blocks of claim text. The endpoint of the analysis is the “proper construction.” Between this starting point and this ending point, is an analytical framework represented below by a black box below: 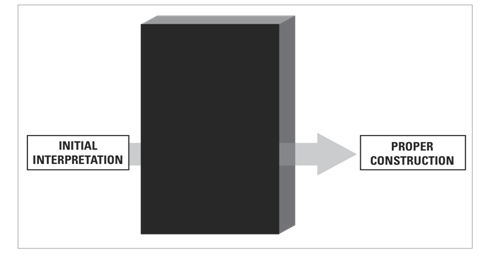 If the claim language employs common, non-technical language, its scope will immediately begin to take on meaning. If the claim language term is technical, the court may ascribe little if any meaning to the term without further review of the patent and surrounding evidence.

The ultimate destination for this process is the “proper construction.” Arriving at the proper construction requires filtering the claim language at issue through a number of rules of claim construction, taking into consideration the pertinent statements in the intrinsic and extrinsic evidence. This process requires that the court view the evidence from the appropriate perspective of a person of ordinary skill in the art, from the relevant time period. The rules to be taken into consideration include the doctrine of claim differentiation, the rules for reviewing the specification for meanings of claim terms, prosecution history estoppel, a review of related patents, etc. The various rules that the court must take into analysis are sometimes contradictory, and typically involve a balancing of considerations. The following chart illustrates the principal points of analysis: 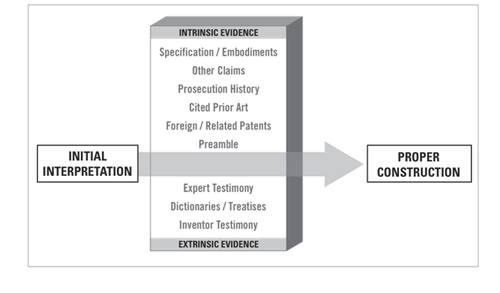 The various factors that govern claim construction are vertically aligned in roughly the order of persuasiveness, with intrinsic evidence at the top, and extrinsic evidence below. The Federal Circuit has often noted, and the Phillips decision affirms, that the specification is the “primary basis for construing the claim” and is in most cases “the best source for understanding a technical term.” However, there is no fixed hierarchy of claim construction rules — “there is no magic formula or catechism for conducting claim construction. Nor is the court barred from considering any particular sources or required to analyze sources in any specific sequence, as long as those sources are not used to contradict claim meaning that is unambiguous in light of the intrinsic evidence.”

Note that the term “ordinary meaning” is not reflected in this chart. This viewpoint is not the first step in the analysis, and it is not the endpoint. It is a helpful reference point, and probably occurs somewhere along the path. The “ordinary meaning” might be determined after doing the work of reviewing the pertinent intrinsic and extrinsic evidence, but before the final construction is rendered. 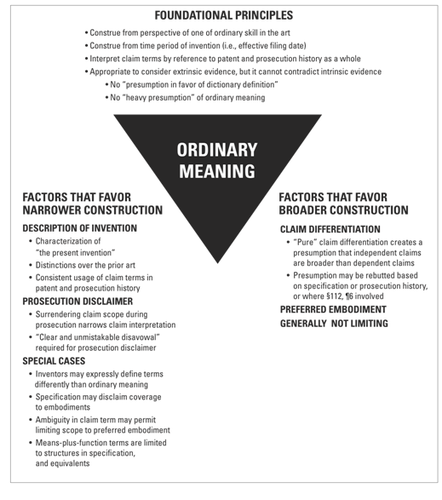 * The article from which this commentary derives is available at http://papers.ssrn.com/sol3/papers.cfm?abstract_id=1476395 and will be published in the Berkeley Technology Law Journal in 2010. The full article provides substantially more detail and explicates not only the substantive rules governing claim construction but also judicial management of the claim construction process. This works grows out the Patent Case Management Judicial Guide project, a treatise developed for federal judges published in 2009 by the Federal Judicial Center. It can be downloaded from http://papers.ssrn.com/sol3/papers.cfm?abstract_id=1328659 and will soon be available in an updated edition from Lexis. We worked with leading patent jurists, practitioners, and academics in developing this guide. We thank the Berkeley Center for Law & Technology and the Federal Judicial Center for their generous support of these projects. We owe special thanks to Judge Ronald Whyte, Judge Kathleen O’Malley, Lynn Pasahow, James Pooley, Mark Lemley, George Pappas, Nick Brown, Carolyn Chang, Tom Fletcher, Jeff Homrig, Marc David Peters, and Sue Vastano Vaughan for their contributions to this project. We also thank Laura Rocheloios and By Design Legal Graphics for their assistance with illustrations.