In its fourth precedential opinion of 2009, an enlarged panel of the BPAI has created a new test for judging whether a claimed machine (or article of manufacture) that takes advantage of a mathematical algorithm falls within the patentable subject matter requirements of 35 U.S.C. Section 101. The two-part test parallels the Federal Circuit’s Bilski decision that focused on the patentablility of method claims. Of course, Bilski is now pending before the Supreme Court and a decision is expected in the Spring of 2010.

The BPAI’s test for a claimed machine (or article of manufacture) involving a mathematical algorithm asks two questions. If the a claim fails either part of the two-prong inquiry, then the claim is unpatentable as not directed to patent eligible subject matter.

(1) Is the claim limited to a tangible practical application, in which the mathematical algorithm is applied, that results in a real-world use (e.g., “not a mere field-of-use label having no significance”)?

(2) Is the claim limited so as to not encompass substantially all practical applications of the mathematical algorithm either “in all fields” of use of the algorithm or even in “only one field?”

In Gutta, the BPAI applied its new test to find its system claim unpatentable. Gutta’s system claim (claim 14) includes two coupled components — namely a memory and a processor.  The claim indicates that the processor is configured to identify a “mean item” whose symbolic value minimizes the variance of a set.  On those facts, the BPAI found that the claim failed the first prong by not limiting itself to any “tangible practical application in which the mathematical algorithm is applied that result in a real-world use.” Likewise, the claim failed the second prong because it “encompasses substantially all practical applications” of the algorithm.  “That is we are unable to identify any other practical application [of the algorithm] outside of the broadly defined claim.”

Interestingly, the decision was issued in August 2009, but made precedential in December 2009. By then, Gutta had abandoned the application. The patent application (SN 10/014,192) is assigned to Koninklijke Philips Electronics. 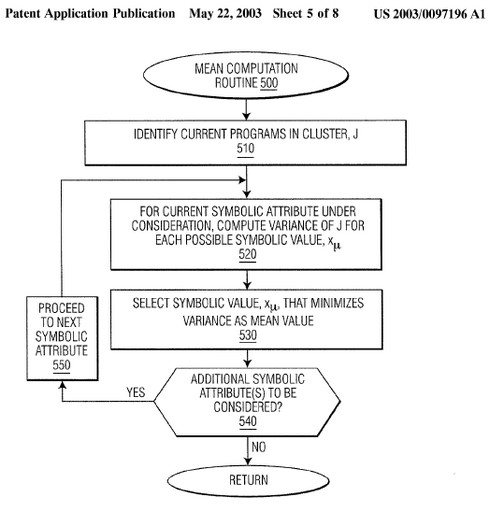