The i4i district court decision created some turmoil this past summer when the Eastern District of Texas court ordered Microsoft to stop selling versions of its flagship MS Word product that infringe i4i’s patent covering xml editing technology. The injunction was stayed pending appeal, but now the Court of Appeals for the Federal Circuit (CAFC) has affirmed the lower court’s findings of validity and willful infringement and its award of enhanced damages and permanent injunctive relief. The only modification made by the court was to push-back the effective date of the injunction from sixty-days to five months (from the original order). Thus, “[t]he injunction’s effective date is now January 11, 2010.”

Because the injunction only applies to future purchasers, Microsoft does not need to back-fix its already-distributed software. Rather, it only needs to ensure that software sold on or after January 11, 2010 is non-infringing. Microsoft may request another emergency stay of relief in order to seek en banc review of the decision. However, that process has a low likelihood of success. Because of the large damage award of $240 million, Microsoft will likely push-forward with requests for rehearing en banc and eventually a petition for a writ of certiorari to the U.S. Supreme Court. 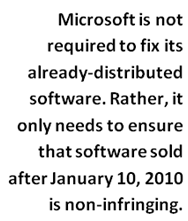 Judging Injunctive Relief: A patentee seeking a permanent injunction must show that (1) it has suffered an irreparable injury due to the infringement; (2) remedies available at law (typically monetary damages) are inadequate to compensate for that injury; (3) considering the balance of hardships between the plaintiff and defendant, a remedy in equity is warranted; and (4) the public interest would not be “disserved” by a permanent injunction. eBay, 547 U.S. at 391. Here the irreparable harm was proven by “evidence that Microsoft’s infringement rendered i4i’s product obsolete for much of the custom XML market, causing i4i to lose market share and change its business strategy to survive.” Monetary damages were inadequate because “a loss of market share, brand recognition, and customer goodwill” typically defy valuation “particularly when the infringing acts significantly change the relevant market, as occurred here.” The balance of the hardships favor i4i because the patented technology is “central” to i4i’s business, but only a small factor in Microsoft’s business. Here, the court held that the “cost of redesigning the infringing products” is irrelevant to the hardship consideration. “Microsoft is not entitled to continue infringing simply because it successfully exploited its infringement.” Likewise, the public interest favors upholding patent rights especially here where the injunction is of a “narrow scope.” “By excluding users who purchased or licensed infringing Word products before the injunction’s effective date, the injunction greatly minimizes adverse effects on the public.”