In January 2010, the Federal Circuit held that the Patent Office had been undercalculating the patent term adjustments (PTA) owed to patentees because of USPTO delays during prosecution. About 80% of issued patents receive some term adjustment. The Wyeth case did not directly impact the calculation of which cases receive an adjustment, rather the decision operates to lengthen the adjustment for those already eligible.

The chart below shows that the change has been substantial. The average PTA grant has increased by six-months — jumping from 14–months to 20–months. (Note — these averages only include patents with an adjustment). One patent in the April 2010 group was adjusted more than eight years and over 500 patents had term-adjustments of more than three years.

These days, any discussion of the US 20–year patent term must consider real impact of these adjustments. 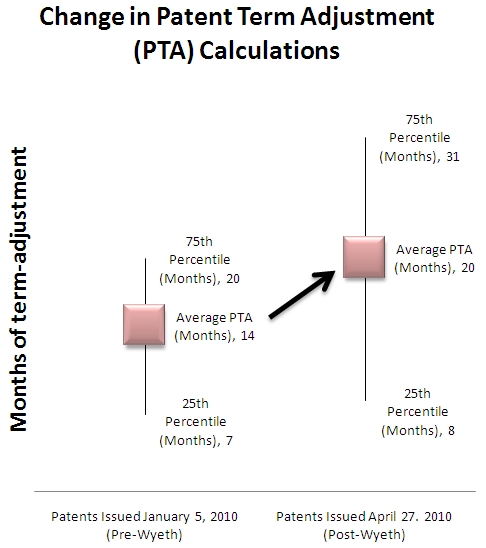 22 thoughts on “The Impact of Wyeth on Patent Terms”