Chief Judge Paul Michel will be retiring from the bench later this month after more than twenty-two years on the bench and five as the chief judge.  He recently offered his annual “state of the court” address at the court’s annual judicial conference. [Read Judge Michel’s remarks].

As Chief, Judge Michel has taken a specific interest in ensuring that the court runs efficiently and quickly. His remarks:

By every measure our decisions continue to be issued more rapidly. As a result, our inventory of pending appeals has dropped from over 1,400 just a few years ago to only 819 as of April 30. Indeed, as of October 1, 2009 it was 897, so the reductions continue.

One benefit is that we hear cases more quickly. In Fiscal year 2006, for example, only 49% of ready cases could be scheduled for argument without delay. By last year, the number was 84%. This year it will likely rise even further.

Another metric we watch is the percentage of appeals decided within 90 days of argument. This number has ranged recently from 75 to 83%. Likely it will reach 85% this year.

Although stepping-down from the bench, Chief Judge Michel is “not retiring, but merely changing mission.” He reports that he expects to play a greater role for campaigning for stronger support the courts and USPTO and may also spend some time as a mediator. 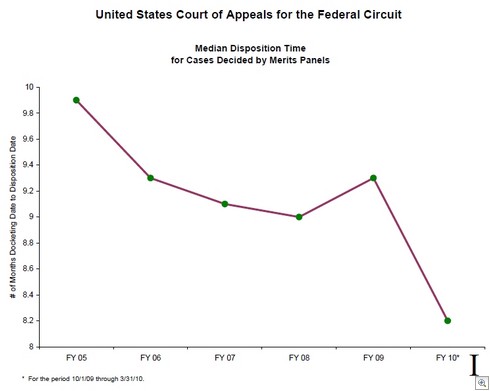 35 thoughts on “Chief Judge Michel: State of the Court”