In a prior post, I wrote about the rising number of requests for continued examination (RCEs) based on preliminary 2009–2010 numbers.  The charts below provides updated figures through June 2010 and is based on data provided by the USPTO.  The primary difference between these figures and those presented in my prior post is that the prior post under-estimated FY2009 figures.  Although the number of RCE filings continues to rise, this new data indicates that the growth-rate has slowed.

Patent Commissioner Bob Stoll’s recent comments prompted this revisit of the data. I briefly discuss those comments below. 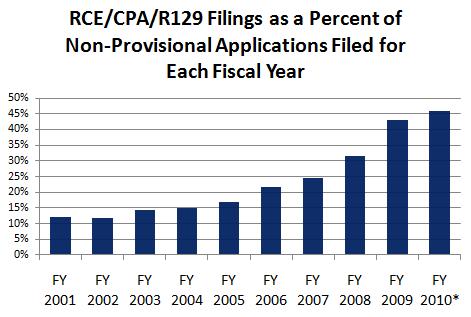 The first chart (above) shows Requests for Continued Examination filings (and earlier forms of CPA and R129 filings) as a percentage of the total number of non-provisional patent applications filed each year.  The denominator here does not include RCE filings but does include continuations and CIP filings. Thus, the calculation is: (Number of RCEs)/(Number of Non-Provisional Filing). The denominator does include plant & reissue applications, but those numbers are negligible.  You may note that my calculations differ from those offered by the USPTO because the USPTO counts an RCE filings as a new application.

The second chart (below) provides raw numbers for the number of non-provisional applications and RCE filings for each year. Again, the non-provisional number does not include RCEs.  A second caveat is that the figures for FY2010 are estimated by extrapolating from current data that goes through June 2010. 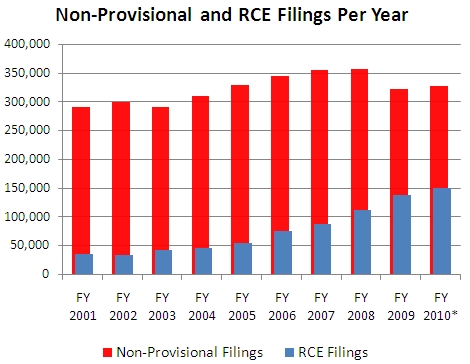 The USPTO under Director Kappos and Commissioner Stoll have been focusing some attention on ways to reduce RCE filings. Specifically, the office believes that a good percentage of RCE filings are classifiable as “unnecessary” because they involve issues that should have been resolved beforehand.  In a recent guest post on the Kappos-Blog, Commissioner Stoll pointed to several initiatives that are designed – in part – to reduce the number of unnecessary RCE’s filed:

The USPTO appears to continue to be very open to ideas and suggestions that can help the PTO improve their process in ways are sensitive to applicant costs and rights. On that point, I am still working through the 230+ reader comments on my recent query asking Why do Applicants File So Many Requests for Continued Examination?