Is "obviousness" a question of law or fact?  The rote answer is that it's both: it's a question of law based on underlying findings of fact.  Drawing that line, however, can be tricky, especially when the jury issues a general verdict.  In addition to addressing this issue, the case discussed below is also noteworthy due to its commentary on KSR on the subject of  motivation to combine.

Wyers v. Master Lock Co. (Fed. Cir. July 22, 2010)
Wyers involved three patents relating to trailer hitch locks.  Trailer hitch locks are mechanisms used to secure trailers to towing vehicles.  It was undisputed that the prior art disclosed the use of dumbbell-shaped locks for this purpose, so the case turned on the the patentee's modifications to these types of locks.  The following images illustrate the prior art: 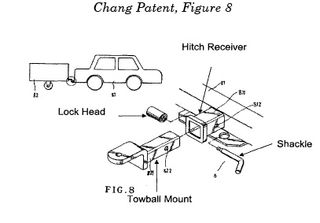 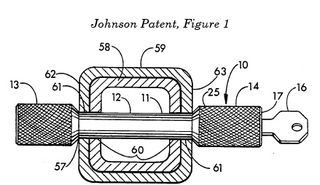 Wyers' patents claimed dumbbell-shaped locks with two additional elements: a series of sleeves that could be placed over the center section (the "shank") in order to increase its diameter, and an external seal designed to keep dirt out of the locking mechanism.  The only issue before the jury was whether it was obvious to add these two elements to the prior art locks.

The jury concluded that it was not, and issued a general verdict of nonobviousness. After the district court denied Master Lock's motion for Judgment as a Matter of Law, Master Lock appealed.

Opinion of the Court
Drawing heavily on KSR, the Federal Circuit concluded that the patents were obvious as a matter of law.  The court considered each of the factual questions before it: whether the art was analogous, whether there was sufficient motivation to combine the reference, and the secondary considerations of nonobvious, and concluded that none favored the patentee.

In reaching this conclusion, the Federal Circuit gave no deference to the jury.  On each issue of fact, the panel found that no evidence supported nonobviousness.  For example, when addressing the issue of whether the prior art was analogous, the court reasoned that it was "clearly within the same field of endeavor as the sleeve patents," and was pertinent as a matter of law.

Particularly interesting, however, were the panel's views on motivation to combine.  While recognizing this as an important aspect of the obviousness inquiry, the panel applied the "common sense" approach outlined in KSR:

"We conclude that it was a matter of common sense to combine the Down patent with the prior art barbell locks in order to arrive at the invention claimed in the ’115 and ’426 patents, and that one of ordinary skill in the art would have had a reasonable expectation of success in doing so."

Slip Op. at 23. Furthermore, "where all the limitations of the patent were present in the prior art references, and the invention was addressed to a 'known problem,' 'KSR … compels the grant of summary judgment ofobviousness.'"  Id. at 17.  Such an approach is particularly appropriate when the technology is "easily understandable."

Finally, on the issue of secondary considerations, the court concluded that, even if Wyers had established the requisite nexus, it would have been insufficient:

Concurrence
Judge Linn concurred with the opinion, but wrote separately to warn parties of the dangers of general verdicts.  He noted that although the law permits general verdicts, verdicts involving special interrogatories are encouraged in the obviousness context due to the mixed question of law and fact.  He further noted that, while the court must presume that the jury resolved the underlying factual disputes in favor of the verdict winner when there are no special interrogatories,

"[b]ecause there is no way to determine from a general verdict on obviousness the specific findings of fact made by a jury on the factual questions underlying its verdict, the court in examining the first part of the obviousness question is left to infer whether substantial evidence existed from which the jury could have made the factual findings necessary to support the verdict. Here, the majority examined the record and after considering the factual inferences concluded that support was lacking and that the claims at issue would have been obvious as a matter of law."

Slip op., concurrence at 4-5.  In other words, when a general verdict is give, the Federal Circuit has to attempt to reconstruct the underlying findings of fact.  Here, it could not discern anything that might reasonably have been in dispute, and thus judgment as a matter of law was appropriate.