Part II of this series describes the methodology used in our working paper The Federal Circuit and Inequitable Conduct: An Empirical Analysis, and summarizes some of the key findings.  You can download the entire paper here.  In addition to responding below, comments can be sent either directly to us or to prm.icpaper@gmail.com.

Methodology
The study uses the technique of “content analysis,” which permits researchers to systematically read and empirically analyze the text of judicial opinions.  In broad terms, we first screened all Federal Circuit opinions that contained the term “inequitable conduct” to identify cases that analyzed the issue.  We read all of these cases, coding pertinent information from each independent analysis of inequitable conduct.1  Overall, we coded information from 361 inequitable conduct analyses between the years 1983 and 2010.  The coded information constitutes the empirical data, and the paper reports these data using a variety of statistical presentations and arguments. 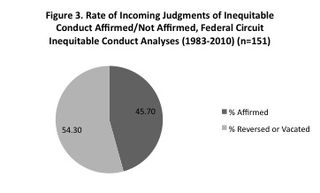 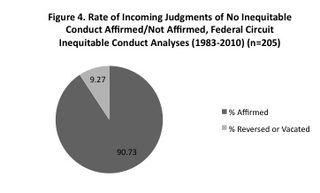 We next looked at the analytical structure of the inequitable conduct doctrine, which consists of three components: a materiality inquiry, an intent to deceive inquiry, and a discretionary judicial balancing of materiality and intent undertaken with a view toward deciding whether a patent applicant acted inequitably toward the public.

Examining the data in this light revealed two key findings.  First, when the Federal Circuit gives a single reason for patentee success, that reason is nearly two and a half times more likely to be lack of intent to deceive than it is to be lack of materiality.  Second, balancing is expressly discussed only 8% of the time and forms the basis for a reversal only 2% of the time.  We think this means that the balancing inquiry does not play much of a substantive role in Federal Circuit inequitable conduct jurisprudence.  To be clear, while it looks like lower tribunals need to engage in this step of the analysis, the Federal Circuit does not seem to have any jurisprudence that guides or constrains how lower tribunals actually apply this step.  Instead, balancing at the Federal Circuit looks like a formality, such as checking a box or touching a base, as opposed to a meaningful guide to determining whether a patent applicant engaged in equitable conduct.

13 thoughts on “The Federal Circuit and Inequitable Conduct: Part II”