Yesterday, I discussed our conclusion that the Federal Circuit applies a stricter standard than the lower tribunals it reviews and that this preference for patentee success manifests through the intent to deceive component of the inequitable conduct analysis.   In this post, I raise some broad ideas about inequitable conduct jurisprudence.  The paper raises others as well, but the ones that follow offer a good perspective into what we believe may be going on.

The first idea is that the Federal Circuit might be applying a standard for intent to deceive that is higher than that required by its own caselaw.  In other words, the Federal Circuit’s articulated standard – intent greater than gross negligence – might be lower then the court’s normative perspectives on inequitable conduct.  At least some circuit judges might be applying a requirement more akin to knowledge or purpose.  This idea finds some support in the empirical evidence.  Our data indicate that patentee win rates can vary dramatically (from 40% to 100%) depending on the judge authoring the opinion, as the below graph of 14 judges who sat on the bench during the past decade illustrates. 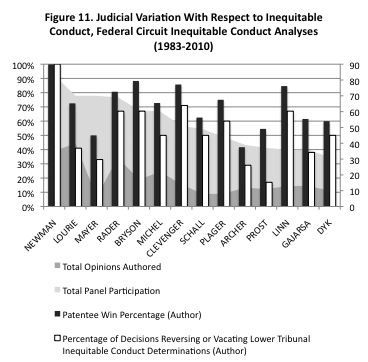 Following closely from this first idea, and also suggested by the Figure, is the notion that when it comes to inequitable conduct the Federal Circuit might be having trouble communicating its standard – particularly with respect to intent – because it is not speaking with one voice.  If the mental state standard applied at the appellate level differs between judges, lower tribunals might have a difficult time “locking on” to the Federal Circuit’s standard.  This problem could be amplified by the fact that, as we have shown, the Federal Circuit does not seem to have balancing jurisprudence, which theoretically would address mental state standards above the threshold.  Thus, rather than having a single standard for intent to deceive that is further refined through the balancing inquiry, Federal Circuit jurisprudence might have at least two distinct (and somewhat bipolar) mental state requirements, one higher than the other.  This state of affairs might produce jurisprudential variation (and perhaps confusion among district courts), and might concentrate (as we have observed) inequitable conduct’s focus on intent to deceive.

Another idea the paper raises is that uncertainty around the standard might reflect jurisprudential design (albeit, probably unintentional jurisprudential design).  For example, perhaps the Federal Circuit believes inequitable conduct doctrine is necessary to protect the integrity of the patent system, but is strongly biased against successful (for the patent challenger) inequitable conduct claims.  Thus, the court might desire to maintain the threat of inequitable conduct so as to encourage patent applicants to take appropriate care in dealing with the public.  Yet allowing too many findings of inequitable conduct might be equally bad, as it could lead the public to question the validity of the patent system altogether, and moreover might invite the “plague” of overasserting inequitable conduct so frequently warned about.  An obfuscated standard for intent to deceive might be just right for balancing these concerns, because it provides a structural context that allows the Federal Circuit to maintain the threat of inequitable conduct – and keep the patent bar in line – but rarely find inequitable conduct.  In effect, this structure encourages patentees to police themselves, and also creates a mechanism by which private parties are responsible for ensuring that patent applicants do not misbehave towards the government, i.e., the law sets up a system that mostly enforces itself.

The entire paper, which also includes additional observations, ideas, and recommendations, can be downloaded here, and we welcome all comments.  In addition to responding below, comments can be sent to us directly at prm.icpaper@gmail.com.  If the download link does not work for you, and you would like a copy of the paper, please email the above address and I will be happy to send you a PDF.

16 thoughts on “The Federal Circuit and Inequitable Conduct: Part III”