In the comment section of a prior post, I highlighted a an Office Action asking an applicant (Intellectual Ventures) to provide further background information on their invention, including “a detailed summary of the improvements” associated with the invention and “any technical information known to Applicant concerning the related art.”

As the present disclosure was submitted without a section describing the background of the invention and, more specifically, the state of the art at the time the present invention was conceived, Examiner also requests, under 37 C.F.R. §§ 1.105 (vi) and (viii), that Applicant submit with the response to this Office Action a detailed summary of the improvements included in the claimed invention as well as any technical information known to Applicant concerning the related art.

In the course of examining or treating a matter … in a patent, or in a reexamination proceeding, the examiner or other Office employee may require the submission, from individuals identified under § 1.56(c), or any assignee, of such information as may be reasonably necessary to properly examine or treat the matter, for example:

37 C.F.R. § 1.105. The rule states that the applicant fully complies by making an accurate statement that “the information required to be submitted is unknown to or is not readily available” to anyone with a Rule 56 duty.

In Star Fruits S.N.C. v. United States, 393 F.3d 1277 (Fed. Cir. 2005), the Federal Circuit agreed that the USPTO has broad authority to request information that goes beyond information defined by Rule 56 as material to patentability.

We think it clear that “such information as may be reasonably necessary to properly examine or treat the matter,” 37 C.F.R. 1.105(a)(1), contemplates information relevant to examination either procedurally or substantively. It includes a zone of information beyond that defined by section 1.56 as material to patentability, and beyond that which is directly useful to support a rejection or conclusively decide the issue of patentability.

In Star Fruits, the Federal Circuit identified the line dividing proper and improper requests as whether the request for information is “arbitrary or capricious.”

So long as the request from the examiner for information is not arbitrary or capricious, the applicant cannot impede the examiner’s performance of his duty by refusing to comply with an information requirement which proceeds from the examiner’s view of the scope of the law to be applied to the application at hand. To allow such interference would have the effect of forcing the Office to make patentability determinations on insufficient facts and information. Such conduct inefficiently shifts the burden of obtaining information that the applicant is in the best position to most cheaply provide onto the shoulders of the Office and risks the systemic inefficiencies that attend the issue of invalid patents. Examination under such circumstances is neither fair and equitable to the public nor efficient.

In Star Fruits, the examiner had requested “any information available regarding the sale or other public distribution of the claimed plant variety anywhere in the world.” The Federal Circuit found that demand for information neither arbitrary nor capricious and therefore enforceable.

The question then for patent examiners is how to respond to the request from above? 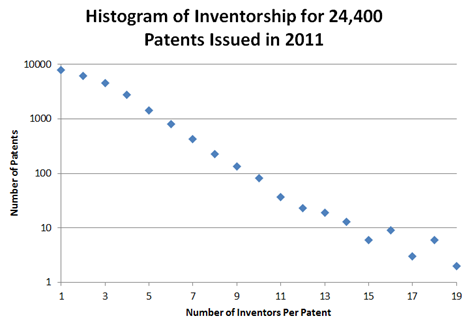 103 thoughts on “Responding to USPTO Requests for Information”