There are now 25,000 ex parte cases pending resolution before the Board of Patent Appeals and Interferences. For the most part, cases being decided today are appeals from final rejections mailed back in 2008 – at a time when the backlog was 80% less than today. And, as the chart below demonstrates, the backlog continues to grow at an alarming pace. Today, the USPTO published a new set of final rules of practice regarding ex parte patent appeals before the Board. The new rules do not directly address the backlog, but do refer to "streamlining" as an important purpose of the rules. As an aside, the recently published FY2011 USPTO Performance Report also fails to mention the BPAI backlog. 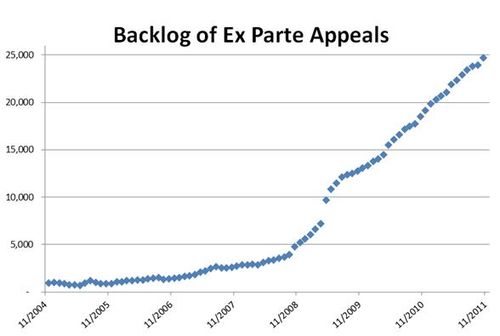 New Rules: The newly published rules are designed to "streamline" practice before the Board of Patent Appeals and Interferences (BPAI) and only apply to ex parte patent appeals. As published, the rules will become effective in on January 21, 2011. The PTO had previously published a similar final that never went into effect and that is now formally withdrawn.