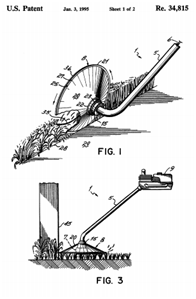 Byrne’s malpractice claim alleges that his former patent attorneys at WHE failed to secure broad enough patent protection for his weed trimming device. See RE 34,815. In 2004, Byrne sued Black & Decker but lost on summary judgment. In that case, the district court ruled that B&D’s device could not infringe because of it did not include a “generally planar outboard flail stabilizing surface” as required by Byrne’s patent claims.

In the subsequent legal malpractice claim, WHE filed a summary judgment motion arguing that the prosecution history showed clearly that the “generally planar” limitation was necessary in order to distinguish Byrne’s invention from the cited prior art.  WHE also argued that Mr. Byrne’s claim should fail because he had so fully participated in the prosecution, including the addition of that limitation into the claim. In the responsive motion, Byrne filed an affidavit discussing the scope of the cited prior art and arguing that the limitation was not necessary for patentability.  Acting sua sponte, the district court rejected Byrne’s testimony — holding that he was not qualified to offer expert testimony as one of ordinary skill in the art.  Without any rebuttal evidence, the court then granted WHE’s motion for summary judgment of no malpractice.

Jurisdiction over Patent Prosecution Malpractice. In several recent cases, the Federal Circuit has expanded the scope of federal court and Federal Circuit jurisdiction over patent malpractice cases. Writing for a 2–1 majority, Judge O’Malley agreed that stare decisis compels federal jurisdiction in this case, but argued that the jurisdictional law should be revisited for cases like this where the cause of action is based upon state-law (malpractice) and the patent issue is only a question of a hypothetical patent claim.

Indeed, it is only the “special and small category” or “slim category” of cases in which a state law cause of action will trigger federal jurisdiction. . . .

[I]t is difficult to see teh federal interest in determining the validity of a hypothetical patent claim that is ancillary to a state law malpractice action. The outcome of such determinations invariably will rest on case-specific inquiries comparing prior art against patent claims that have not and will never issue. As such, these determinations, which involve only application and not interpretation of patent law, have little or no bearing on other cases. On the other hand, finding federal jurisdiction over malpractice cases involving questions of hypothetical patent claims opens the federal courthouse to an entire class of actions, thereby usurping state authority over this traditionally state law tort issue. . . .

Applying these federalism considerations, several courts either have outright disagreed with our analysis or have found a meaningful distinction when only hypothetical patent rights are at stake. . . . In many cases, the procedural posture prevents us from reviewing these decisions, thus allowing courts simply to ignore our law. We address the issues in this appeal, however, because our existing case law compels us to do so.

This is the type of issue that the Supreme Court tends to hear, and a high quality petition for certiorari would have a good chance of gaining the high court’s attention.  Aiding this theory are the growing number of state and federal court decisions that have criticized the Federal Circuit jurisdictional holdings and the general rarity non-patent-related cases of finding federal question “arising under” jurisdiction where no federal cause of action is alleged.

On the merits, the Federal Circuit ruled that the lower court abused its discretion by refusing to let the inventor testify regarding the scope and content of the prior art and its relation to the invention. The particular problem with the lower court’s finding was that it made no finding of the qualifications of one of ordinary skill in the art and whether Byrne possessed that level of skill.  In several prior cases, the Federal Circuit has held that inventors typically possess at least ordinary skill in the relevant art and therefore “it is especially inappropriate for the district court to strike Byrne’s affidavit without going through the exercise of identifying the requisite level of skill.”  On remand, the district court will likely hear Byrne’s testimony and consequently reject WHE’s summary judgment motion.