In its annual Performance and Accountability Reports, the USPTO publishes a statistic identified as the "Pendency time of average patent application." The reports describe the figure as the "average time (in months) between filing and issuance or abandonment of utility, plant, and reissue applications. This average does not include design patents." I have charted the PTO's reported average pendency below in the first chart. The chart shows that for 2011, the PTO was successful in keeping average pendency under three years. 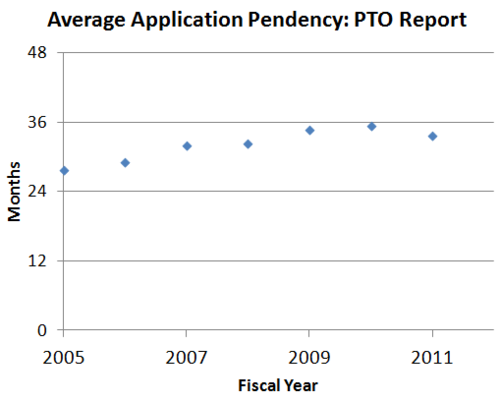 Unfortunately, the PTO's numbers are somewhat misleading. The main technical problem with the USPTO numbers is that any request for continued examination (RCE) is counted as an abandonment of an application and a refilling of a new application. Thus, an application that remains pending for four years before issuance and that includes an RCE filing will be counted in the PTO calculations as two applications with an average two-year pendency. The PTO reporting also includes other application "reworkings" such as continuation applications and divisional applications that tend to be processed somewhat faster than original non-provisional applications.

The chart below adds two additional pendency calculations: One calculation ignores RCEs in the pendency calculation – looking instead at the time from non-provisional filing to issuance.  Thus, under my calculation, an application that remains pending for four years before issuance and that includes an RCE filing will be counted as one application with a four-year pendency.  The second calculation also ignores RCE filings and additionally limits the data set to only original non-provisional applications (excluding continuations, divisionals, and CIPs). As expected removing the RCE artifact from the data adds considerably to the average pendency. (Note here that my chart is lacking because it does not include statistics for pendency of abandoned applications.) 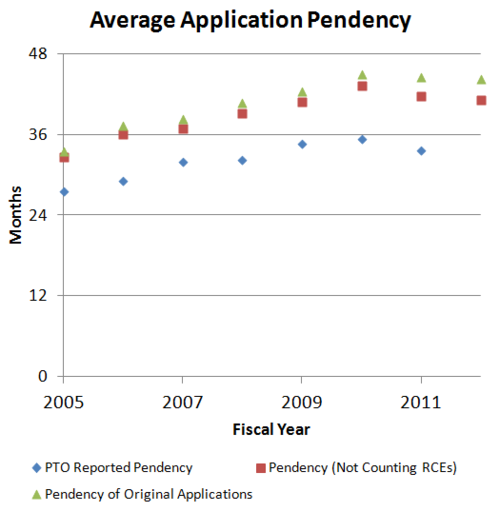 The final chart shows a pendency histogram for patents issued in October and November of 2011 (again ignoring RCE filings). The median pendency is 3-4 years. 98% issued within nine years of filing. 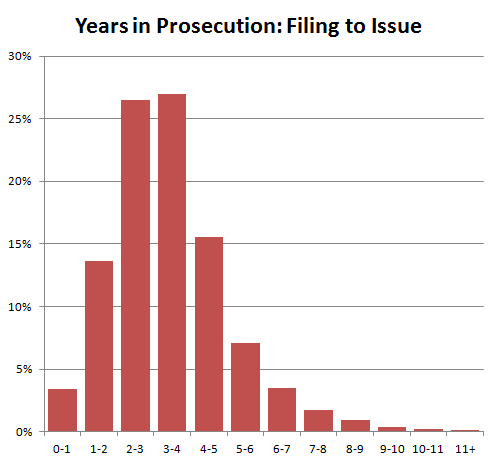