The number of patents involved in litigation
The number of patent suits filed each year is well known.  But what about the number of patents involved in those cases?  Mark Lemley and others have estimated that about 1-2% of all issued patents have ever been litigated.  To test this estimate, I searched the LEXIS utility patents database using the LIT-REEX field to identify all patents that were flagged as the subject of litigation filed in the year 2009.*  I ended up with 3404 patents, or approximately 2% of the average number of utility patents that the PTO issued annually over the previous decade.

This result provides further confirmation of the conventional belief that the vast majority of patents are never litigated – especially since I suspect it overstates the percentage of patents involved in litigation, as it assumes that the litigation flag is limited to just infringement suits (as opposed to inventorship disputes, for example) and it does not take into consideration the fact that some patents are the subject of multiple suits filed in different years.

How old are these patents?
The below chart shows the age of the patents involved in suits filed in 2009.  More than half (55%) of these patents were at least five years old as of the litigation filing date; 24% were over ten years old. 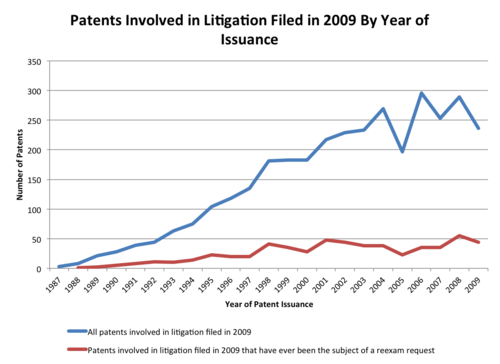 *I used 2009 because the 2010 and 2011 results were affected by the numerous false marking suits filed in those years.

39 thoughts on “Patents, Litigation and Reexaminations”