In a split opinion, the Federal Circuit has affirmed a lower court ruling that Ergo's asserted claims are invalid. Judge Moore explains in her opinion, that the claims are indefinite under 35 U.S.C. § 112 (2) because the means-plus-function limitations are not supported by any corresponding structure disclosed in the specification.  Judge Linn joined Judge Moore's opinion.  Judge Newman dissented.

Describing, Enabling, and Defining: 35 U.S.C. § 112 (1) requires that a claimed invention be fully described and enabled. In addition, the claims must be drafted in a manner that particularly identifies the scope of rights being claimed.  35 U.S.C. § 112 (2).  Although overlapping, these three requirements—written description, enablement, and definiteness—are separate and distinct requirements. Thus, a claim may fail the definiteness requirement even though the invention sought to be patented was fully described in the original specification in "full, clear, concise, and exact terms" and in a way that "enables any person skilled in the art … to make and use the same."

Means-Plus-Function: Patent claims ordinarily recite particular "structure, material, or acts" as elements that both provide for the inventive step and limit the scope of rights. 35 U.S.C. § 112 (6) allows a patentee to alternatively draft limitations as "a means or step for performing a specified function without the recital of structure, material, or acts in support thereof." To a lay reader, these means-plus-function claims appear quite broad. For instance a claimed "means for connecting elements A and B" seemingly covers any method or structure that accomplishes the claimed function. However, the statute itself require that means-plus-function claims be given a much more limited scope. Under § 112 (6), a means-plus-function claim "shall be construed to cover the corresponding structure, material, or acts described in the specification and equivalents thereof." Thus, to know the meaning of a claimed "means for connecting," we must look to the patent specification to see what particular connecting means were disclosed and the scope of the claim would be limited only to those disclosed structures and their equivalents. The result here is that means-plus-function claims typically have a scope that is much narrower than one might expect on the initial reading.

Undefined Means: In recent years, a number of means-plus-function claims have been invalidated as lacking definiteness under § 112 (2). (I.e., invalid as indefinite). Courts follow the following approach: (a) The statute requires that a means-plus-function element be defined according to corresponding structure found in the specification. (b) If no corresponding structure is found then the term cannot be defined and (c) is therefore invalid as indefinite.

This case offers yet another example of claims being held invalid based upon means-plus-function claim elements that lack corresponding structure in the specification. The claims recite a "control means for controlling [an] adjusting means." The patentee argued that its disclosure of a general purpose computer was sufficient structure because a computer would be able to accomplish the task-at-hand. On appeal, the court rejected the patentee's argument and affirmed that such a computer was insufficient structure since a general purpose computer could not accomplish the function required by the claim. The court wrote that the patentee could have satisfied the requirement by additionally including the algorithm that the computer would use to accomplish its task."

If special programming is required for a general purpose computer to perform the corresponding claimed function, then the default rule requiring disclosure of an algorithm applies. It is only in the rare circumstances where any general-purpose computer without any special programming can perform the function that an algorithm need not be disclosed.

Thus, the means-plus-function limitation has no corresponding structure in the specification because "there is no algorithm described in any form for the function of 'controlling the adjusting means.'" As a result, the claim is invalid as indefinite.

In an extended dissent, Judge Newman argued that the ruling amounts to a formalistic technicality that is unfair to patentees – especially when the enablement and written description tests are not offended by the claim.

Disfavored by Patentees: Because of their narrow scope and high-likelihood of invalidity, "means for" claiming has been on a steady decline for the past two decades. The chart below shows a time series of the percent of patents that include at least one "means for" claim limitation. (Note – my search was for "means for" and so some MPF claims are not counted). These days, the only ones being caught in this trap are either (1) being poorly advised or (2) attempting to improperly extend the scope of their patent beyond what was actually invented. In my view, prudent patent applicants today never rely on MPF claims as their broadest or strongest claims. However, many still find some role for those claims and it is important to recognize that means-plus-function claim scope varies dramatically on the international level. 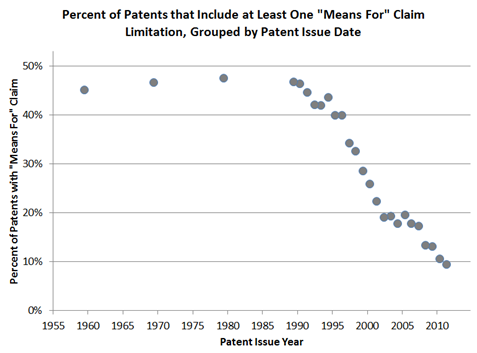 Device for: The majority opinion suggests the next frontier of challenge – patent claims that rely heavily on functional language but that do not use the magic "means" language. Here, the court at least suggests that an equivalent claim drafted as a "device for controlling" would have been invalid under the same analysis. The court wrote "The [hypothetical] recitation of 'control device' provides no more structure than the term 'control means' itself, rather it merely replaces the word 'means' with the generic term 'device.'"

30 thoughts on “Means-Plus-Function: Invalid as Indefinite”