I have written before that about 50% of patents expire prematurely because the patent owners choose to not pay the maintenance fees. In many ways this is a good thing in that it clears-the-deck of patents whose owners may know of their worthlessness but that still require analysis and consideration by anyone conducting a freedom-to-operate search. And, by the time that maintenance fees are due (especially the 2nd or 3rd stage fees), the patentee should have a good sense of the market value of particular patent rights and can thus make an informed decision about whether or not to pay the fees due. Professor Rochelle Dreyfus wrote about this briefly in her 2006 article titled Pathological Patenting. Dreyfus wrote that “application fees should be low enough to attract patenting by all inventors and maintenance fees should be high enough to encourage abandonment of noncommercial patents.” Rochelle Dreyfus, Pathological Patenting: The PTO as Cause or Cure, 104 Mich. L. Rev. 1559 (2006).

The maintenance fees set forth in the NPRM are reasonable since by this point in the process, patentees should have a better sense of the value of their Intellectual Property (IP), although the PPAC still questions the increase proposed for the third stage maintenance fee. Given the percentage of patentees who currently pay for this stage, the concern is that revenues will decrease more than projected when fewer patentees elect 3rd stage maintenance. As the USPTO has noted, the AIA Fee Setting authority does not contemplate a once-and-done approach, but careful (at least yearly) review of fees and the observed behaviors of both applicants and Office personnel in response to the fees. PPAC encourages such continual review, especially with respect to things like responses to the 3rd Maintenance Fee and potential future course-corrections.

The chart below provides a time series of maintenance fee payments grouped according to fee payment deadline. Maintenance fees are due at three points following patent issuance: 3 ½ years; 7 ½ years; and 11 ½ years and the current fees are $1,130, $2,850, and 4,730 respectively (with 50% discounts for small-entities). In each case, the patentee is given an additional six-months to pay the maintenance fee (with a late-penalty surcharge). Thus, the USPTO does not officially record the patent as expired until the 4 year; 8 year; or 12 year mark respectively. It is those expiry deadlines that are represented in the chart below. Even after expiry, the USPTO generously allows expired patents to be revived. Those revivals are taken into account in the chart. 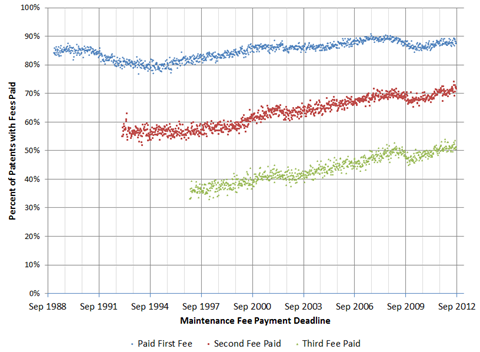 From the chart, we can see that the percentage of payments for the second and third fee have fully recovered from the 2008-09 downturn and are at their highest points in the past decade. Payment for the first maintenance fee payment is still slightly below the pre-downturn rate. I expect another drop once the USPTO implements the new fee structure in early 2012. The chart above is important for USPTO revenue, but it doesn’t tell the whole story since the number of issued patents has been rising over the past 12 years, as we move forward USPTO revenue may increase even if fee payment percentages decrease.

Patent Expiry: An important element of any freedom to operate search involves the question of whether or not particular patents have expired and thus freely available in the public domain for subsequent commercialization. Unfortunately, our current patent information system does a very poor job of linking patent expiration to search results. In addition, the USPTO’s loose revival allowances (that make it easy to revive abandoned patents) mean that the data could not currently be relied on even if available. We still have some work to do.