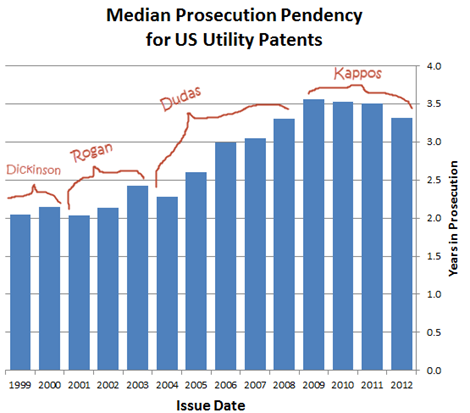 To be clear, this is not a complete dataset. Rather, to create the chart I pulled up the group of utility patents issued on the first Tuesday of September for each year 1999-2012. Then, for each group, I identified the median pendency as calculated from the patent application filing date to the issue date and ignoring any priority claims. The median pendency is typically more time consuming to identify than is the arithmetic average. However, I believe it provides a comparatively better sense of the data in this case. Prosecution pendency tends to have a substantial skew allows a small number of patents with exceedingly long pendencies to shift the averages. Relying on the median eliminates that difficulty. Because of this ever-present skew, the median is always somewhat smaller than the average – perhaps making the situation look rosier than reality. However, I’m comfortable with this result that largely ignores the top .5% of patent pendency because those tend to be quite special cases. For fun, I also overlaid the names of the USPTO directors in office at the various points in the timeline.

Why should we care about patent pendency?: Reducing patent pendency has been a major goal of the Kappos directorship. However, it is probably useful to pause for a moment to consider whether we should care about pendency and backlog. Certainly we want to know and understand the delay in order to advise our clients on how to order their affairs. But, should we care whether the delay is relatively longer or shorter? In my view, the major harm of long delay is not felt by patent applicants, but rather by parties releasing new products who cannot rely upon parties who cannot rely on

Most of the backlog delay occurs between the time that the patent application is filed and the mailing of the first action on the merits (FAOM). From a patentee’s perspective, that delay can actually be good. It allows the patent applicant to delay payment of certain fees (such as issue fees) and costs (such as attorney fees for prosecution) and provides the applicant with additional time to consider whether or not to pursue rights based upon the additional expected costs of patenting. When taking market developments into account, the delay also provides the applicant with time to adjust claim scope to better capture the market value of the invention. One potential problem with delays in prosecution is a reduction in patent term. However, the Patent Act generously compensates patentees for any term lost due to PTO delays (by adding additional time to the end of the term). Sometimes applicants have good reasons to want quick patent issuance. For those instances, the USPTO allows the applicant to pay a fee in order to skip the backlog queue. The so-called “track one” fee is a hefty $4.8k, but it is an option and my pre-AIA survey found that charge not unreasonable. At least in a somewhat simplified world, this $4.8k limits the per-application loss to applicants caused by the delay. I.e., if an applicant was going to be harmed by more than $4.8k due to the lengthy backlog, then the applicant can simply pay the fee to avoid that harm. This is a simplified world because, inter alia, applicants might not know from the outset that there is any benefit to a more rapid patent issuance.

The real problem with the backlog is that the resulting prosecution delays create uncertainty for product developers and marketers – those that actually create new products and sell them on the market. The long pendency allows patent applicants to watch the market and shift patent rights to cover activity that was previously considered legitimately open. During that time, manufacturers simply cannot know whether their products will be covered by patents held by some third party. For many market areas, this greatly increases the risk that products legitimately released into the stream of commerce and placed in the hands of consumers will – some years later – become infringing because of third-party patents that eventually issue. Many of the policy justifications that support old statutory bar of 35 U.S.C. 102(b) would also discourage a system that allows this result.