The USPTO patent allowance rate has seen a steady rise since David Kappos took the helm as Director in 2009. Early-on Kappos announced that his version of patent quality meant that bad patents should not issue and that right-sized inventions should be allowed. That statement was a shift from the prior administration that publicly focused solely on the side of avoiding the issuance of bad patents. Kappos' ideas and theories have permeated the USPTO, both in its culture and in performance reviews.

The first chart below shows a monthly time series of the USPTO allowance rate. 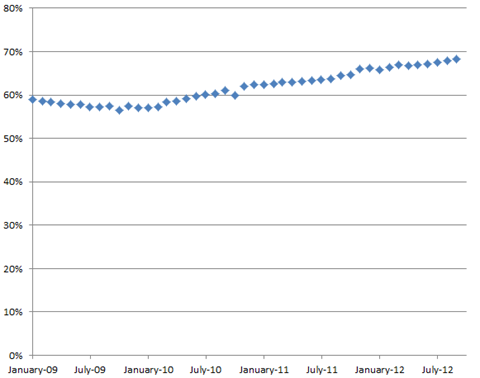 In several recent posts, I have written about the reality that the USPTO is issuing more patents than ever – a historical high. Up to now, my working hypothesis has been that the increased allowance rate represents only a minor explanation for the increase in the number of issued patents. Rather, my hypothesis has been that there has generally been an increased throughput that means both more allowances and more abandonments. However, my thoughts have shifted in the process of rethinking the substantial increase in allowance rates demonstrated above. 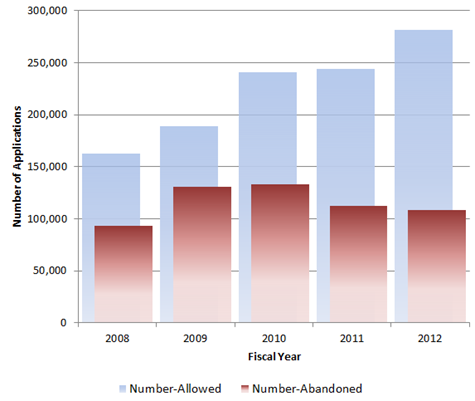 As is apparent, increase in throughput at the USPTO is entirely accounted-for by an increase in the number of allowances. The chart below divides the data on a monthly basis (but uses a six-month average because of a large amount of monthly variance). 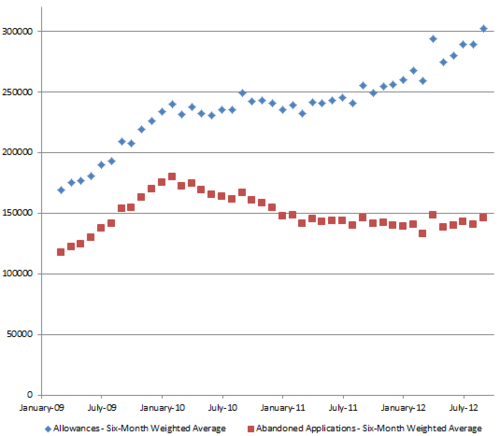 I like to think of patent prosecution as a negotiation between the patent applicant and the USPTO over the proper claim scope and patent coverage. As with any negotiation, changes in the practice of one party will normally result in changes to the practice of the other party. We have public statements from Director Kappos suggesting intention to move toward a higher allowance rate, but it is unclear whether part of the shift is also due to changes in practice by patent attorneys. One change in practice that I suggested earlier is the general increase in the number of provisional patent applications as well as foreign applications. I have a working hypothesis that applicants have increased their reliance on those tools as mechanisms to self-select the best applications for filing and abandoning the patent even before filing a non-provisional. Still, it is cognitively difficult for me to separate the clear shift in the data in 2010 from the cotemporaneous statements and managerial moves by Director Kappos.

It will be interesting to see how this chart develops over the next two years as the next PTO director takes over and provides her own imprimatur.