Hal Wegner recently sent around an interesting note regarding the Federal Circuit and the fact that there are only nine regular judges on the court (excluding senior judges). This number is down from the court's usual contingent of twelve judges. Notably absent are Retired Chief Judge Michel, Senior Judge Linn, and Senior Judge Bryson. Richard Taranto has been nominated to fill Chief Judge Michel's position that has been vacant since 2010. No nominees have been put forward yet to replace either Judge Linn or Judge Bryson who took senior status in November 2012 and January 2013 respectively.

The current nine-member circuit is important in the context of petitions for en banc (re)hearing. The court's normal operating procedure is that a case will only be heard en banc if a majority of judges favor an en banc hearing. With the current slate of nine regular members, a majority requires only five votes.

This is particularly relevant to claim construction because a majority of current member have suggested that Cybor should be reviewed and have thus implied that judges should be given some amount of deference – at least for the factual conclusions that lead to the claim construction.

The most recent en banc vote on revisiting Cybor case was the 2012 Highmark petition that lost on a 6-5 vote. Since that vote, two judges from the majority have left the court. Wegner writes:

Once Richard Taranto is confirmed, a majority will immediately require six votes – a much less likely outcome. 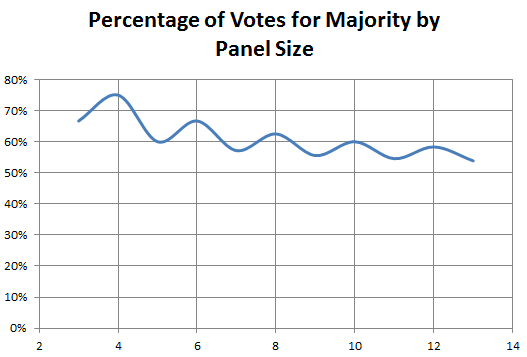