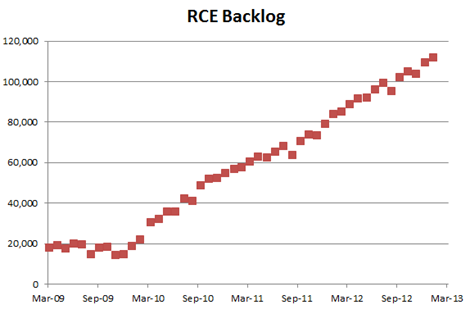 The USPTO’s backlog of requests for continued examination (RCEs) continues to grow. The chart above shows the backlog of RCEs that have not received a first action on the merits since the RCE filing. The increased backlog is explained by both a slight rise in the number of RCEs being filed each month and a slight drop in the number of RCEs being examined. The drop in examination rates for these RCEs is explained by changes in the docketing, quota, and count system for examiners. These changes implemented by former Director Kappos slightly decreased the “counts” given for examining RCEs and also allowed examiners to delay examining RCEs without direct penalty. You’ll note the annual dip in the backlog around September – the time when some examiners rush to make their end-of-fiscal-year numbers. 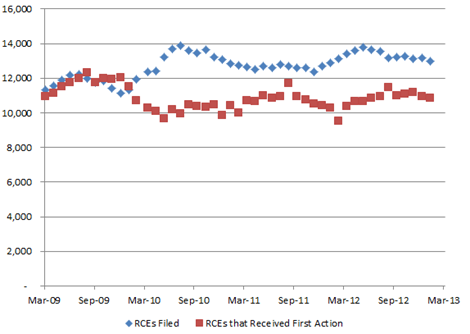 The USPTO has recognized that the rapid growth in RCE backlog is unacceptable and has been searching for the best response. As a stop-gap measure, USPTO Commissioner of Patents Peggy Focarino has announced that the count system will temporarily revert to the old system that gave full credit for RCE work. Focarino writes:

[T]he RCE credit will be adjusted from 1.75 (or 1.5) to 2.0 until September 30, 2013. . . . With this additional credit, I am asking each of you to help reduce the RCE backlog. With these changes it is anticipated that the RCE backlog will be reduced significantly by the end of this fiscal year. . . . Thank you for your continued hard work and dedication as we strive to be the Best Place to Work in the Federal Government.

My understanding is that examiners will now receive 1.25 counts for a first action following an RCE and an additional .75 counts at the disposal. This puts RCEs on par with original examination. Taken together with the increased fees for RCE filing, I expect that this change will entirely stem the tide of RCE growth. However, it does not address the very real concern of why so many RCEs are necessary.