Here, the Federal Circuit holds that the district court abused its discretion in denying Trebro’s motion for preliminary injunction to stop ongoing infringement of its U.S. Patent No. 8,336,638. The patent covers sod harvesters and FireFly’s ProSlab 150 is said to infringe. This is an interesting case in terms of “troll” identity. Trebro did not itself invent the patented equipment and does not actually practice the invention. However, Trebro does compete directly with FireFly in the sod harvester business. Although the “troll” status of the plaintiff is generally irrelevant to patentability questions, many believe it is directly relevant to questions of injunctive relief.

The patented invention appears to have stemmed from an off-shoot of the Canadian sod harvester company BrouwerTurf. Trebro purchased the patent in 2013 as payment for a past debt but allowed Brower to retain a full license. Trebro then sued FireFly for infringement.

The money quote from the Federal Circuit decision is as follows: “[A] party that does not practice the asserted patent may still receive an injunction when it sells a competing product.”

Decisions like this serve as a boon for operating companies whose patent portfolios are largely based upon acquisition – such as Google. 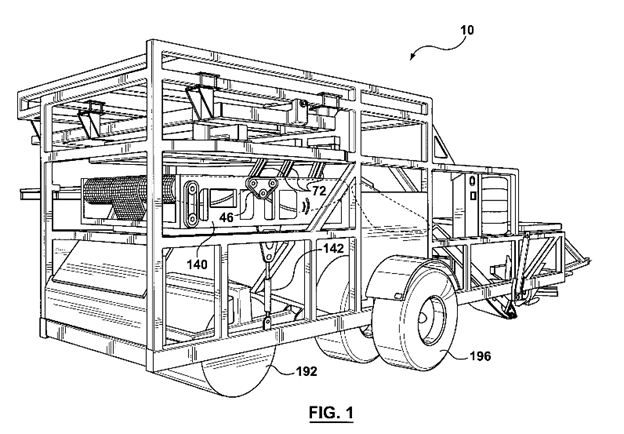 In denying the patentee’s preliminary injunction motion, the district court made three findings. First, that the accused product did not include a vertically moveable “horizontal conveyor” as required by the asserted patent; Second that the vertical moveability limitation was of questionable novelty. Finally, the district court found ongoing competition harms (lost customers and market share) did not create any irreparable harm. On appeal, the Federal Circuit disagreed with each of these conclusions because involving misreading the patent and misapplying the law. The decision here might be seen as a contrast to the Federal Circuit’s other recent preliminary injunction decision where the court found fault with the grant of a PI. See Crouch, Substantial Unresolved Issues Unravel Preliminary Injunction.

The patent statute does not expressly permit preliminary injunctions, but does generally provide courts with authority to “grant injunctions in accordance with the principles of equity.” 35 U.S.C. § 283. The U.S. Supreme Court has discussed preliminary relief in a number of contexts and the statutory language suggests that principles from other contexts should apply in the patent situation as well. See Ebay v. MercExchange, 547 U.S. 388 (2006) and its progeny. A key to preliminary injunctive relief is that the movant is asking the court to award a remedy before making a determination of the merits of the case. That reversal of common chronology is only done with reluctance. Thus, the ordinary rule for preliminary injunctive relief is judged by the difficult-to-prove four factor test that it is (1) likely to eventually succeed on the merits of the case; (2) is to suffer irreparable harm absent an injunction; (3) that the balance of equities favor the movant; and (4) that the public interest favors injunctive relief. The requirement of “a likelihood of success on the merits” has always been confusing to me. A 10% chance of winning is still “a likelihood.” That is not how the court intends the rule to be seen. Rather, the Federal Circuit (and other courts) interprets this term as meaning the movant will more-likely-than-not win the case. A defendant can escape preliminary injunctive relief by poking holes in the case – such as demonstrating a substantial question as to whether the patent is valid or infringed.

The preliminary injunction factors have two distinguishing features when compared to the eBay factors designed for permanent injunctive relief. First, preliminary injunctions require proof of a likelihood of success on the merits. That factor tends to be heavily considered and thus makes preliminary relief more difficult to obtain. The likelihood of success factor is not considered in the context of permanent injunctive relief because that issue is generally only decided after a merits decision finding for the patentee. The eBay factors also include an additional element not found in the preliminary relief construct. That factor—that remedies available at law are inadequate to compensate for the injury—has caused some amount of academic consternation because of its extensive (perhaps entire) overlap with the irreparable harm factor. For preliminary relief, its absence of little importance because preliminary relief was not typically available in the courts of law.