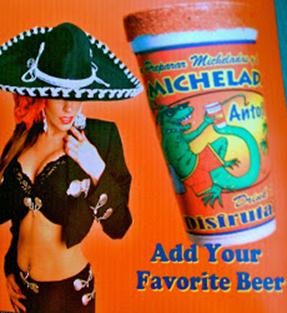 New Castle sells a “spice cup” known as the “Micheladas Antojitos.” The Styrofoam cups are factory-dipped in a secret spice blend that is “carefully selected to enhance the flavor of your favorite beer or cocktail .” While an employee of New Castle, Robert Montiel learned the “secrets” behind the spicy-mix-cup and later sold that information to Greg Murkijanian who began to develop a competing product known as Cheveladas. New Castle then sued for trade secret misappropriation under California law and demanded preliminary injunctive relief. (New Castle did not have any patent rights).

The trial court rejected the claim for preliminary relief and here the California appellate court affirms – finding that the trade secret mix was has not been sufficiently described in order to warrant protection.

Unlike patent rights, trade secrets need not be expressly defined on paper prior to the establishment of those rights. Rather, it is enough that a valuable and protectable secret exist. However, the law does typically require trade secret owners to provide some written description of its asserted trade secret at the point of enforcement.

The California Code of Civil Procedure provides that:

CODE OF CIVIL PROCEDURE SECTION 2019.210. See also, Mark Lemley, The Surprising Virtues of Treating Trade Secrets as IP Rights, 61 Stan. L.Rev. 311 (plaintiff should be required to “clearly define[ ] what [trade secret] it claims to own, rather than (as happens all too often in practice) falling back on vague hand waving”).

Here, the plaintiff only generally alluded to the “process of applying a secret solution to the inner and outer surfaces adjacent the lip of a beverage cup to permit a first mixture of spices to adhere to those surfaces.” According to the courts, that general allusion is insufficient to meet the burden required by California law .

The trial court questioned whether New Castle and Monugian had any trade secrets because of the lack of details in their trade secret designation and their failure to describe their trade secrets with sufficient particularity. The court expressed concern that “what we need is a description with sufficient particularity,” and the court asked, “If I were [to] grant your [requested] preliminary injunction on the record as it stands right now, how would we ever know whether it was violated or not?” On appeal, New Castle and Monugian do not address these concerns by making a well-reasoned argument that their trade secret designation was sufficiently specific to justify an injunction prohibiting use of their claimed trade secret information. New Castle and Monugian assert in their reply brief, without citing to any evidence, that “the sufficiency of the disclosure could have been resolved by simply viewing the device” and that “had the trial court viewed the device, the boundaries of an injunction would have been easier to fashion.” They do not explain, however, how a physical inspection of the device would reveal the precise nature and description of their secrets or guide the court in crafting an appropriate injunction, nor how such an inspection would be relevant to the alleged trade secrets in the spice mixture and blending.

Obviously, without proof of a trade secret, no preliminary injunction could issue.

For those of us coming from the patent field, it easily makes-sense that someone wanting to protect information as a trade secret should be able to at least describe the information to the court in a way that is reasonably precise and complete. That burden is somewhat less than what is placed on patent applicants and is not applied until the point of enforcement. However, an important and unique element of this case is that the written description requirement noted above comes from California Civil Procedure law. It is unique to California law and not generally an aspect of the Uniform Trade Secret Act that has been adopted across the nation. See, Graves & Range, Identification of Trade Secret Claims in Litigation: Solutions for a Ubiquitous Dispute, 5 Nw. J. Tech. & Intell. Prop. 68 (2006).

A corollary requirement of specificity for claimed trade secrets is inferable from this holding: If a particular piece of information, or a formula, is not entitled to trade secret protection because it is “so vague and indefinite” at the time it is divulged, then it cannot be granted protection as a trade secret by a court during litigation if it is “vague and indefinite.” Specificity is required at the moment of divulging so that the party to whom the secret is revealed understands the contours of the secret information and does not inadvertently or purposefully transgress its boundaries. Similarly, specificity is required before the court so that the defendant can defend himself adequately against claims of trade secret misappropriation, and can divine the line between secret and non-secret information, and so that a jury can render a verdict based on a discriminating analysis of the evidence of disclosure and misappropriation.

30 thoughts on “The Written Description of a Trade Secret”