This opinion is notable because it involves an emerging split in the Federal Circuit’s  jurisprudence on “X plus function” claim language.  At the heart of the split is the presumption that arises from the non-use of the word “means” in a claim.  Under the majority’s ruling in this case, that burden is extremely difficult to overcome; a holding that furthers the tension with the Federal Circuit’s recent decision in Bosch v. Snap-On. 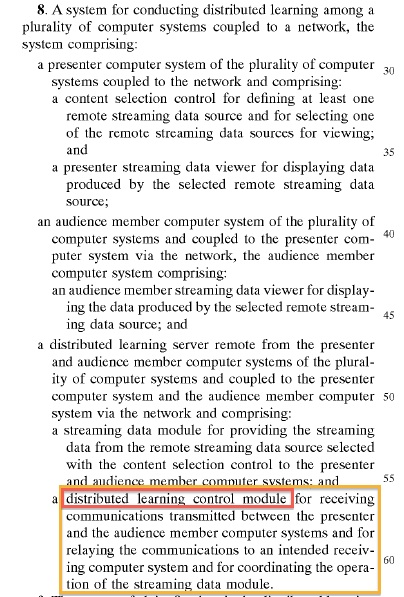 The patent in this case is part of the bankruptcy estate of the @Home Corporation, a late 1990’s venture to provide cable internet and later, a content portal.  (Those of you who were online in the late 1990’s may remember the company or the multi-billion dollar merger of @Home and Excite in 1999).    Shortly after the dot-com bubble burst, @Home collapsed and entered bankruptcy proceedings.  The plaintiff in this case, Richard Williamson, acts as trustee for the At Home Bondholders’ Liquidating Trust and has brought a series of patent infringement suits against major technology companies in an effort to recover assets for the debt holders.

Patent No. 6,155,840 describes and claims “[a] system for conducting distributed learning among a plurality of computer systems coupled to a network.”  Williamson brought an infringement suit against an array of defendants, including Citrix, Microsoft, Adobe, Cisco, and IBM.  At the district court, the defendants obtained a favorable claim construction at the district court on three key terms, two in independent claims 1 and 17 and one in independent claim 8, leading to a stipulation of noninfringement of claims 1-7 and 17-24 and of invalidity due to indefiniteness of claims 8-12.

On appeal, the Federal Circuit reversed the district court’s claim constructions for both groups of claims.  The reversal as to the first group (1-7 and 17-24) is not particularly noteworthy.  There, the majority concluded that the district court erroneously imported an extraneous limitation into the claims: the claim element called for “a graphical display representative of the classroom” and the district court construed this as requiring a “pictorial map illustrating an  at least partially virtual space in which participants can interact, and that identifies the presenter(s) and audience member(s) by their locations on the map.”  “While the specification discloses examples and embodiments where the virtual classroom is depicted as a “map” or “seating chart,” nowhere does the specification limit the graphical
display to those examples and embodiments.”  Slip Op. at 10.  The proper construction  is “a graphical representation of an at least partially virtual space in which participants can interact.”

Judge Reyna disagreed in part.  In his view, “the specification and prosecution history make clear that the ‘graphical display representative of a classroom’ terms are properly construed as requiring a visually depicted virtual classroom.”  Dissent at 2 (emphasis added).  Judge Reyna reached this conclusion based on the specification and prosecution history’s distinguishing of the invention from the prior art based on the presence of this additional element.  [Given Judge Reyna’s views, it sounds like these claims may be invalid under the majority’s claim construction].

The Section 112 Issue: The more significant portion of the opinion involves the second group of claims, which implicate issues of claim construction, functional language, and indefiniteness.  The district court construed the element “distributed learning control module for…” as being a § 112, ¶ 6 [now § 112(f)] means-plus-function element.  Because there was no corresponding structure for the claimed function disclosed in the specification, the claim was indefinite.  (I’ve highlighted the relevant section of the claim in the image above).

On appeal, the majority concluded that it was error to treat “distributed control module” as a means-plus-function claim term.  Under the court’s precedent, the failure to use the word ‘means’ in a claim limitation creates a strong presumption that 35 U.S.C. § 112, ¶ 6 does not apply.  And rebutting this presumption requires meeting a very high standard: “it must be demonstrated that ‘skilled artisans, after reading the patent, would concluded that [the] claim limitation is so devoid of structure that the drafter constructively engaged in means-plus-function claiming.’ Inventio AG v. ThyssenKrupp Elevator Ams. Corp., 649 F.3d 1350, 1357 (Fed. Cir. 2011).’ ” Slip Op. at 13 (my emphasis added). “A claimed expression cannot be said to be devoid of structure if it is used “in common parlance or by persons of skill in the pertinent art to designate structure, even if the term covers a broad class of structures and even if the term identifies the structures by their function.” Lighting World, 382 F.3d at 1359–60.

Applying this “devoid of structure” standard, the majority concluded that the presumption was not rebutted.  There are at least some meanings of “module” that connote structure.  “The district court, in characterizing the word “module”
as a mere nonce word, failed to appreciate that the word ‘module’ has understood dictionary meanings as connoting either hardware or software structure to those skilled in the computer arts.”  Slip Op. at 14.  In addition, the full term, “distributed learning control module,” is part of a structure, “distributed learning server,” and interconnects and intercommunicates with that server.  “These claimed interconnections and intercommunications support the conclusion that one of ordinary skill in the art would understand the expression “distributed learning control module” to connote structure.”  Id. at 16.  The specification, too, suggests that “distributed control module” is not “devoid of structure.”

“Module” is a ‘nonce” word: Dissenting Judge Reyna would have agreed with the district court that the language triggered Section 112, para. 6.  “Module” is simply a substitution for “means”; the effect is the same, as the claim limitation follows the term with “for” and three functions performed by the “distributed learning control module”:

Dissent at 5.  In support of this conclusion that “module” is tantamount to “means,” Judge Reyna cites sources recognizing that terms such as  “module for” may invoke Section 112, para 6, including the Manual of Patent Examining Procedure.  Furthermore, the majority’s citation of sources indicating that “module” can connote hardware, software, or both does not provide structure: “It refers only to a “general category of whatever may perform specified functions.”  Id. at 6, quoting Bosch v. Snap-On.  None of the addition material relied on by the majority provides any structural significance.

The Intra-Circuit Split: Setting aside the issue of whether the Federal Circuit’s current algorithmic approach to indefiniteness of functional language conflicts with  Supreme Court precedent, an issue that Dennis and I have written about, this opinion reflects one of two different approaches to interpreting “X plus function” language in claims. (When “X” is something other than “means” or “step.”).

The majority’s holding in this case is an extension of a line of cases applying a very high threshold for “X plus function” language to trigger application of § 112, ¶ 6.  To rebut the presumption in these cases, the “X” must simply “connote” structure to a person of ordinary skill in the art (and arguably under the way the standard is applied in Williamson, merely be capable of connoting structure).  Put another way, the presumption is only rebutted if the claim term is “devoid” of structure.

The Federal Circuit’s recent opinion in Bosch v. Snap-On, which Dennis wrote about in October, reflects the second approach, which applies a less-strict threshold for   rebutting the presumption.  In Bosch, the court described the analysis as asking “if the claim language, read in light of the specification, recites sufficiently definite
structure to avoid § 112, ¶ 6…The question is whether the claim language names
particular structures or, instead, refers only to a general category of whatever may perform specified functions.”  Bosch at 7 (emphasis added).  There, the court concluded that “program recognition device” and “program loading device” did lack sufficient structure; the term “device” was a “nonce” word.  The result was the opposite of Williamson: § 112, ¶ 6 was triggered and, because there was no corresponding structure the specification, the claims were indefinite.

For purposes of direct comparison, I’ve pasted the statements of the law from these two cases below.

Although both “program recognition device” and “program loading device” are presumed not to invoke § 112, ¶ 6, we must next turn to the issue of whether this “strong” presumption against means-plus-function claiming is overcome. See Lighting World, Inc. v. Birchwood Lighting, Inc., 382 F.3d 1354, 1358 (Fed. Cir. 2004). In undertaking this analysis, we ask if the claim language, read in light of the specification, recites sufficiently definite structure to avoid § 112, ¶ 6. Inventio, 649 F.3d at 1357. The question is whether the claim language names particular structures or, instead, refers only to a general category of whatever may perform specified functions. See Laitram Corp. v. Rexnord, Inc., 939 F.2d 1533, 1536 (Fed. Cir. 1991) (“[t]he recited structure tells only what the means-for-joining does, not what it is structurally”). In the latter case, § 112, ¶ 6 then commands a construction of the limitation as referring to specification identified corresponding structures and their equivalents.

*The panel originally included former Chief Judge Rader.  Upon his retirement, Judge Moore was appointed to join the panel.