Guest Post by Hannah Jiam.  Ms. Jiam is now a 3L at UC Berkeley School of Law and research assistant with Professor Colleen Chien.  The full article related to this post is forthcoming in the Berkeley Technology Law Journal and is available here.

It has been a year since the Supreme Court’s decision in Octane Fitness[1] and Highmark[2], and fee-shifting continues to be a popular issue in patent reform. Testimony presented to the House Judiciary Committee on February 12, 2015 discussed the percentage of attorneys’ fees awards before and after Octane. This month, the House Judiciary Committee discussed the fee-shifting provision from the Innovation Act.[3] Congressman Bob Goodlatte, the Chairman of the Judiciary Committee, explained how the bill would “address the issues that businesses of all sizes and industries face from patent troll-type behavior.”[4] Director Michelle Lee of the PTO supported the fee-shifting provisions in the Innovation Act, saying that the “fault based fee-shifting will raise the costs for those who engage in abusive actions.” There have been several articles and papers discussing the impact of Octane Fitness, but none of them provide an in-depth analysis of the district court holdings and the emerging trends post-Octane. I would like to contribute my own research and empirical analysis on the issue.[5]

In the ten months following the Supreme court’s holding in Octane, there has been a significant increase in the number of motions made for attorneys’ fees under § 285, as well as the number of attorneys’ fees award to prevailing parties.[6] From April 29, 2014 to March 1, 2015, district courts awarded fees in twenty-seven out of sixty-three cases. This rate, approximately 43%, is at least two times greater than the fee-shifting award rate in previous years.[7] In fact, in the 12 months preceding Octane, only 13% of § 285 motions were granted.[8]

I sorted the § 285 motions granted and denied by district, and reproduced them in the graph below. 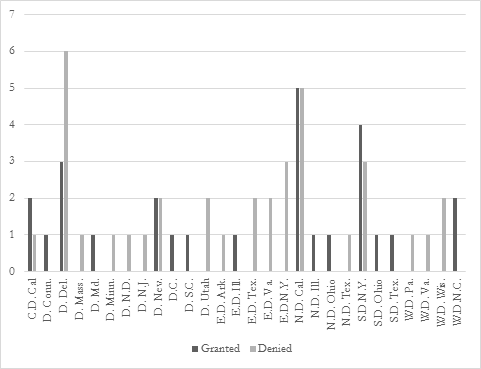 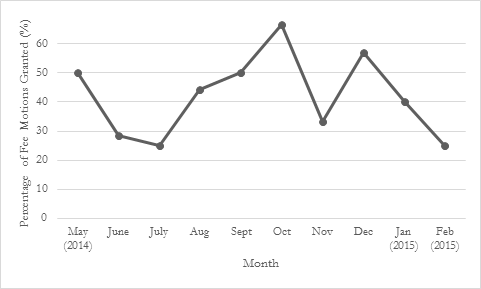 The variation in the rates between each month could have been a result of any number of variables (such as a district court judge’s availability, the load of a district court’s docket, etc.), but the percentage of § 285 motions granted each month has always been above the 20% yearly average in 2002 and 2011, and well above the 13% award rate in the 12 months preceding Octane.

I created a histogram of the award amounts in cases where the § 285 motions have been granted. Most of the cases have not yet determined the amount of attorneys’ fees to be awarded to the prevailing party, but the majority of § 285 awards thus far have ranged from $200,000 to $300,000. 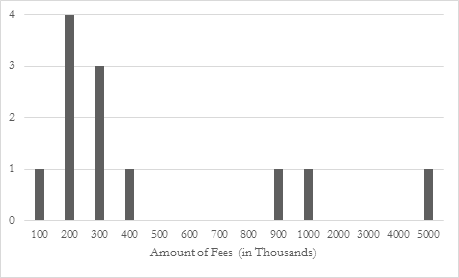 Most courts have specifically limited the attorneys’ fees to the litigation misconduct and apportioned the fees to the “exceptional” behavior. This may explain why most of the fees are around $200,000 to $300,000.

Because the meaning of “exceptional” is still ambiguous and discretion may lead to forum shopping in district where fee awards are more or less likely under § 285, the “exceptional” case standard could benefit from further explanation. Unfortunately, the Federal Circuit’s ability to review a determination of “exceptionality” is limited by the Highmark decision, where the Supreme Court stated that a § 285 decision was a “matter of discretion” and that the exceptional-case determination should be reviewed only for abuse of discretion.[11] Any steps towards further patent reform would be most effective through legislation – Congress can clarify the fee-shifting provision or decide whether or not it wants to maintain an “exceptional” standard under § 285. Furthermore, the Supreme Court’s interpretation of an “exceptional” case places a strong emphasis on the discretion of the district courts despite the removal of the “discretion” element in the 1952 Act. If Congress wants to elucidate or maintain the Supreme Court’s reintroduction of discretion, it should not wait for litigation.

[6] The following numbers were determined using LexisNexis and Westlaw to consolidate all cases from April 29, 2014 to March 1, 2015 involving a 35 U.S.C. § 285 motion. The cases retrieved were checked against a list on the blog Patently-O.com that consolidated several fee-shifting motions post-Octane. The analysis considered factors such as whether fees were awarded, the district, the court’s reasoning, and the award amount. Other analyses of § 285 motion decisions post-Octane have produced similar grant rates.

[8] A Comparison of Pre Octane and Post Octane District Court Decisions on Motions for Attorneys’ Fees Under Section 285, available at http://ipwatchdog.com/materials/FCBA-Fee-Shifting-Paper.pdf.