The US International Trade Commission (USITC) provides an alternate/additional forum for asserting patent rights. Unlike district court, the USITC is not empowered to award damages for past infringement but can only enjoin future importation of infringing articles through what is known as an exclusion order.  Although limited, these exclusion orders can carry substantial power – simply because so many high-tech products sold in the U.S. are manufactured abroad.

The Congressionally designated purpose of the USITC is to protect U.S. industry.  In the IP context, this purpose has been implemented as a requirement that USITC patent assertions be associated with a domestic industry.  Under Section 337(a) of the Tariff Act of 1930 (as substantially amended), “with respect to the articles protected by the patent,” the patentee must show that there is, within the U.S.:  “(A) significant investment in plant and equipment; (B) significant employment of labor or capital; or (C) substantial investment in its exploitation, including engineering, research and development, or licensing.” 19 U.S.C. § 1337(a)(3).  To be clear, although the USITC requires a domestic industry related to products covered by the patent, there is not requirement that the patentee be a U.S. company. 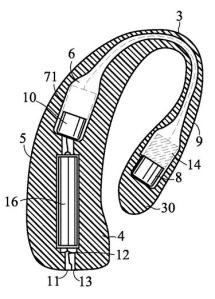 Here, the owner of the asserted U.S. patent No. 7,931,605 is the Canadian company Standard Innovation Corporation.  The invention covers an “electro-mechanical sexual stimulation device to be worn during intercourse.” The Federal Circuit euphemistically identifies this as a “kinesiotherapy device.”

Standard Innovation has its products manufactured in China, although the company does use some U.S. sourced components (such as the backbone material, rubber, pigment, and control-chip wafer). The manufactured product is then shipped worldwide, including to the U.S. where a wholly-owned U.S. subsidiary distributes the product.

The court’s reasoning here is somewhat odd — that the statute requires a quantitative analysis of the amount of domestic industry that was not provided by the USITC.

All of the foregoing requires a quantitative analysis in order to determine whether there is a “significant” increase or attribution by virtue of the claimant’s asserted commercial activity in the United States.

On appeal, the Federal Circuit rejected these “qualitative elements” – finding that the statute requires a quantitative analysis of the impact on domestic investment and employment.

The USITC argued that its qualitative analysis was in parallel to that done in the prior case of Certain Male Prophylactic Devices, Inv. No. 337-TA- 546, USITC Pub. 4005 (June 21, 2007) (patent at issue).  However, the court found that it didn’t fit. That is, the prior decision was appropriately characterized as quantitative in nature.