In this post, Sarah Burstein, Associate Professor of Law at the University of Oklahoma College of Law, examines the design patent components of the Federal Circuit’s recent Ethicon decision.  Dennis’s discussion of the utility patent’s indefiniteness issue is here.

Ethicon alleged that Covidien’s Sonicision cordless ultrasonic dissection device infringed various utility and design patents. Each of the asserted design patents claimed a portion (or portions) of a design for a surgical device. A representative image from each patent is shown below:

The district court granted summary judgment that the design patents were invalid for lack of ornamentality and not infringed. Ethicon appealed.

The Federal Circuit reversed the grant of summary judgment of invalidity. A patentable design must be, among other things, “ornamental.” The Federal Circuit has interpreted this as, essentially, a type of non-functionality requirement.

In deciding that the designs were invalid as functional, the district court relied on a number of factors from Berry Sterling Corp. v. Pescor Plastics, Inc. In Berry Sterling, the Federal Circuit stated that, in addition to the existence of alternative designs:

In their appellate briefs, the parties disputed the relevance and relative weight of these factors. Ethicon noted the significant tension between Berry Sterling and other controlling precedents, arguing that “[b]efore and after Berry Sterling, this Court has treated the presence or absence of alternative designs that work as well as the claimed design as a dispositive factor in analyzing functionality.” Covidien, on the other hand, argued that the availability of alternative designs was not a dispositive factor.

In its decision, the panel attempted to harmonize the conflicting precedents by stating that the Federal Circuit had not, in fact, previously “mandated applying any particular test for determining whether a claimed design is dictated by its function and therefore impermissibly functional.”

Although Ethicon had submitted evidence of alternative designs, Covidien argued they were not “true alternatives because, as the district court found, they did not work ‘equally well’ as the claimed designs.” The Federal Circuit disagreed with Covidien for two main reasons:

First, the district court’s determination that the designs did not work “equally well” apparently describes the preferences of surgeons for certain basic design concepts, not differences in functionality of the differently designed ultrasonic shears. . . . Second, to be considered an alternative, the alternative design must simply provide “the same or similar functional capabilities.”

The Federal Circuit also decided that, in finding the claimed designs to be functional, the district court “used too high a level of abstraction,” focusing on general design concepts—for example, on the concept of an open trigger—instead of “the particular appearance and shape” of the claimed design elements. The Federal Circuit therefore reversed the district court’s summary judgment of invalidity.

This decision also provided some useful clarification about how to apply the design patent infringement test, as formulated by the en banc Federal Circuit in Egyptian Goddess, Inc. v. Swisa, Inc. In the wake of Egyptian Goddess, some lawyers have argued that: (1) a court must (almost) always consider the prior art when analyzing design patent infringement; and (2) in certain circumstances, the prior art can be used to broaden the scope of a patented design.

In Ethicon, the panel helpfully—and accurately—clarifies the rule of Egyptian Goddess, noting that:

In this case, the district court engaged in a “side by side comparison between the claimed designs and the design of Covidien’s accused shears” and determined that they were plainly dissimilar and, therefore, the design patents were not infringed. The Federal Circuit provided these images as a representative example: 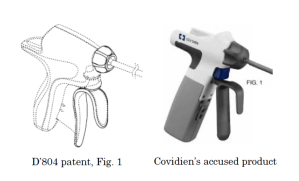 Ethicon argued that they were not plainly dissimilar and that the district court erred in not considering the prior art, “which Ethicon characterizes as predominantly featuring thumb-ring and loop-shaped triggers.” Essentially, Ethicon sought to broaden the scope of its patent by showing some significant visual “distance” from the prior art.

The Federal Circuit disagreed with Ethicon, finding no genuine dispute of fact on the issue of infringement. According to the court, the designs were only similar “[o]n a general conceptual level.” And because the designs were plainly dissimilar, the court “did not need to compare the claimed and accused designs with the prior art.” The court therefore affirmed the grant of summary judgment of non-infringement.