Answers to these questions may be pertinent when developing strategies as to whether to file a continuation application. Frequent continuation filings may indicate that competitors consider it important to have the claiming flexibility of keeping a family alive or a trend toward filing omnibus applications (disclosing multiple ideas or idea aspects per specification). Meanwhile, any advantage of a continuation must be considered in view of its cost, which depend in part on prosecution expectations. 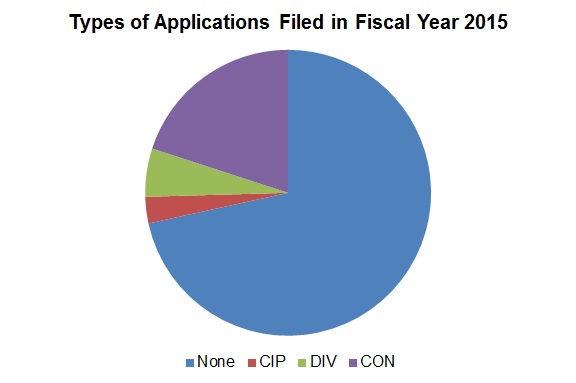 FIGs. 2A and 2B respectively show the unnormalized and normalized distributions of filing types per fiscal year. The percentage of applications that were continuations doubled from 9% in 2005 to 18% in 2015. 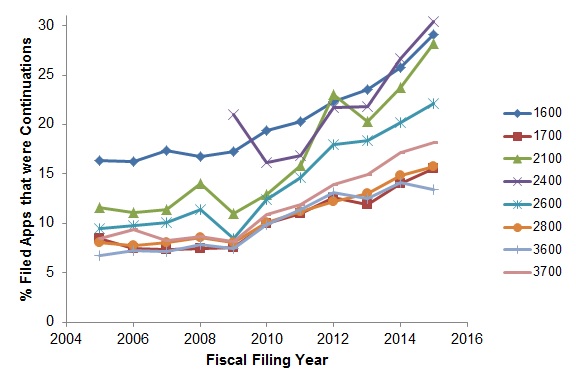 Potentially, experience with a parent application (and, typically, a same examiner) may guide claiming strategy for a continuation. Thus, perhaps, continuations represent a two-fold cost-savings opportunity: a savings in drafting and in prosecution costs. Assessing the latter potential savings requires evaluating allowance rates and office-action counts of continuation applications. Accordingly, we evaluated prosecution statistics from a recent time period (July 2014-July 2015) for each of the application types.

Discussion: Why and How to File Continuations

Continuation applications provide a variety of advantages, including an opportunity to seek a new scope of protection in view of business priorities and to strategically draft claims in view of ongoing or threatened challenges to a patent. This latter upside is becoming increasingly significant as the number of post-grant challenges continues to grow.

Should an applicant decide that the advantages of keeping a family alive are sufficiently important, claiming strategy for the child application must then be identified. Slightly tweaking an allowed claim may result in minimal prosecution costs. However, a fast allowance will lead to an overall cost of the family exploding (assuming repeated continuation filings). Seeking substantially broader protection, meanwhile, may lead to extended and frustrating prosecution. Our data showing that continuation and original applications have similar prosecution statistics suggest that applicants are not consistently choosing an easy or hard continuation-claiming path, though it may be explained by split uses of these types of claim-drafting techniques.

Another approach to continuations is to seek protection of a completely different idea in the specification. This could allow a resulting patent family to provide diverse protections towards different elements of an applicant’s technology. However, a new focus requires that the new idea be supported and enabled by the original specification. In an era where flat fees and legal bidding wars are common, it is our hypothesis that few applicants are willing to pay the higher drafting fees for preparation of such enhanced applications. However, we believe that this is a strategic approach and should be more frequently used.

Consider a case where an applicant is seeking patent protection of two ideas. A traditional approach is that separate patent applications be drafted for each idea. Another approach is to draft a single “omnibus” patent application that describes both ideas. One idea can be the focus of an original filing, and another the focus of a continuation filing. Then, by investing in keeping a single family alive (via the original and continuation filings and/or additional continuation applications), claiming flexibility for each idea is preserved. Further, if ideas within an omnibus application are related, drafting fees may be less than preparing two independent applications. The application may also illuminate synergies and interactions between the ideas, which may further expand claiming possibilities.

17 thoughts on “Guest Post: To File a CON? Empirical Popularity and Prosecution Outcomes”