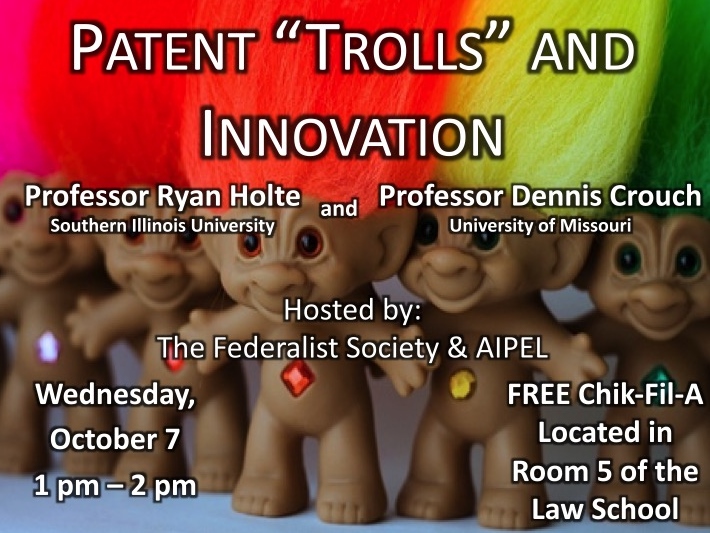 The announcement to my upcoming Mizzou event with Prof Holte is exciting, but so is our topic.  Discussion will center around Holte’s case-study article: Trolls or Great Inventors: Case Studies of Patent Assertion Entities.

There has been much debate about the economic harms caused by patent infringement lawsuits filed by patent holders who do not make or sell products covered by their own patents — entities pejoratively referred to as “patent trolls.” This debate has thus far been largely theoretical or based on broad industry-wide data. The purpose of this Article is to present a focused empirical report that has previously been lacking — detailed information regarding the inventors themselves, the patent assertion entities (PAEs) that represent them, and the stories behind their patents. The research for this Article centers on two instructive case studies: (1) MercExchange, L.L.C., the prominent PAE whose seminal patent infringement action against eBay continued to the Supreme Court in eBay Inc. v. MercExchange, L.L.C., 547
U.S. 388 (2006); and (2) Capital Security Systems, Inc., a lesser-known PAE that has sued some of the largest banks in the world on its patented electronic check processing technology. This Article explores the stories behind the inventors, the patented inventions, and the entities asserting the patents in order to develop a more complete contextualized picture of PAEs and their economic impact. Based on this more complete picture, the Article then assesses whether these patent holders warrant the “patent troll” moniker, lurking under the bridge of innovation waiting to harass and extort innovators attempting to pass, or whether they instead resemble the great American vision of a Horatio Alger novel protagonist, laboring to build that bridge of innovation brick-by-brick and eventually reaping a reward for their hard effort. The Article concludes that, while additional studies are needed, the two PAEs studied herein fall squarely into the latter honest laborer category.