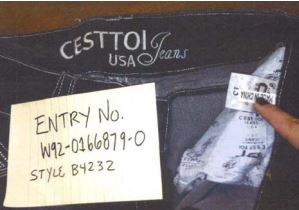 Although not a patent case, the JBLU decision has important commercial implications.  JBLU is an American company that sells jeans under the C’est Toi Jeans USA brand. Of course, despite the “USA” name in the brand, the jeans are not manufactured in the US, but rather in China. That fact (‘made in china’) was noted on the inside label of the jeans. (See specimen above).

Customs officials looked at the jeans and determined that they failed the country-of-origin labeling requirement of 19 U.S.C. § 1304(a) (“[E]very article of foreign origin … imported into the United States shall be marked in a conspicuous place … in such manner as to indicate to an ultimate purchaser in the United States the English name of the country of origin of the article.”).  Applying its regulatory authority US Customs created a set of regulations that indicate the use of “USA” or “America” on imports is likely to create confusion and so the country-of-origin must be made even more conspicuous (placed near the “USA” symbol and in equivalent size).  However, the regulations are somewhat relaxed when USA is part of the trademark name.  The Court of International Trade sided with customs officials – that JBLU must meet the more stringent standard (and had failed to meet that standard). On appeal, the Federal Circuit reversed.

The key issue here involved interpretation of the “trademark” term as used in the customs statute.  The CIT interpreted the word to be limited only to marks that are registered U.S. trademarks or else those subject to a registration application in the USPTO. (giving deference to the Customs interpretation of the term).  On appeal, though, the Federal Circuit reversed that determination and instead applied the broader definition found in the Lanham Act of  “any word, name, symbol, or device or any combination thereof adopted and used by a manufacturer or merchant to identify his goods and distinguish them from those manufactured or sold by others.” 15 U.S.C. § 1127.  In making this determination, the Federal Circuit chose to give no deference to Customs interpretation of its own regulations because the term “trademark” as used in the regulation “unambiguously includes federally registered and common law trademarks.”

If a regulation is clear on its face, no deference is given to the promulgating agency’s interpretation, and we interpret the regulation in accordance with its unambiguous meaning. Viraj Grp. v. United States, 476 F.3d 1349 (Fed. Cir. 2007). Doing otherwise would allow the agency, “under the guise of interpreting a regulation, to create de facto a new regulation.” Christensen v. Harris County, 529 U.S. 576 (2000). The fact that a term is not defined by a regulation does not make it ambiguous and entitled to deference. Executive Jet Aviation, Inc. v. United States, 125 F.3d 1463 (Fed. Cir. 1997).

On remand, the CIT will now become a trademark court to determine whether the C’est Toi Jeans USA counted as a trademark back in 2010 when the imports occurred.  (Following the import, the company did apply for TM registration on the brand).