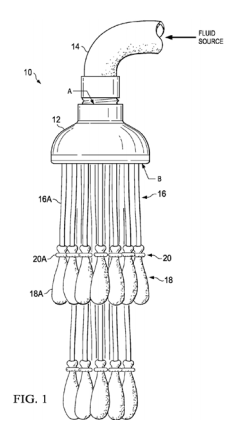 In an opinion by Judge Stoll, the Federal Circuit has affirmed an E.D.Texas preliminary injunction barring the accused infringer from selling its “Balloon Bonanza” product “or any colorable imitation thereof.”

I previously wrote about the case that involves Telebrands’ patented balloon-filling-toy. U.S. Patent No. 9,051,066.  The case is one of the first lawsuits involving a post-AIA patent.

Preliminary Injunctive Relief: Even before eBay, courts applied a four-factor test to determine whether to award a preliminary injunction to stop ongoing infringement pending a final judgment in the case. (eBay changed the rule for permanent injunctive relief.).

A decision to grant or deny a preliminary injunction is within the sound discretion of the district court, based upon its assessment of four factors: (1) the likelihood of the patentee’s success on the merits; (2) irreparable harm if the injunction is not granted; (3) the balance of hardships between the parties; and (4) the public interest.

The factors are slightly different than those considered for permanent relief in eBay.  Most importantly, at the pre-trial stage, the patentee has not established that it will actually win the case and be eligible for any remedy at all. Thus, the Preliminary Injunction factors include consideration of who is likely to win.  The Prelminary Injunction factors also eliminate the eBay factor that “remedies available at law are inadequate to compensate for the injury” by rolling that factor into the irreparable harm consideration.  A fifth element that is not usually stated in the test is that the patentee must also be willing and able to post a bond to the court that will compensate the enjoined party if it turns out that the injunction was improper. Rule 65(c) requires a bond “in an amount that the court considers proper to pay the costs and damages sustained by any party found to have been wrongfully enjoined or restrained.” Fed. R. Civ. P. 65(c). Two important aspects on appeal: (1) A district court’s PI order (either grant or denial) is immediately appealable even though it is a non-final interloctutory order. 28 U.S. Code § 1292. (2) Because district courts are given discretion in awarding preliminary injunctive relief, those judgments are given deference on appeal.

PTAB Interplay: As with so many US patent lawsuits, the case involves a parallel AIA-trial. Since the patent at issue here is a post-AIA patent, the challenger was able to file for post-grant-review (PGR).

The timeline is relevant:

As noted above, a key factor for awarding preliminary relief is the likelihood that the patentee will ultimately win the case on the merits.  Although a patent is presumed valid, a challenger can overcome this hurdle by showing that the patent is “vulnerable” to a specific validity challenge.  The court has also termed this as finding a “substantial question concerning the validity of the patent.”  A seemingly reasonable approach here would be to say – “If the PTO concludes that claims are likely invalid, then those claims are probably vulnerable to being found invalid.”  Here, the court does not follow that approach and – in fact – does not even mention the PTAB initiation decision in its discussion of the aforementioned vulnerability.  (The court does state that the PTAB has taken action, but does not appear to draw any conclusions for this case from that parallel proceeding).  Implicit holding here is that the PTAB initiation of a PGR Does not negate a preliminary injunction.

Rather, the appellate panel walked through the district court decision and found that (1) someone of skill in the art would likely understand the term “substantially filled” and thus it is not indefinite; and (2) the district court did not err in holding that prior art associated with filling an endoscopic balloon was not analogous or pertinent to the problem of filling toy water balloons.

Motivated to Consider vs Motivated to Combine: The Federal Circuit is still working through how to deal with the analogous arts test post KSR.  Here, the court ultimately found there was no ‘motivation to combine’ the prior art since one of the references was not ‘analogous art.’  In at least pre-KSR tradition, these were separate inquiries within the obviousness process outlined in Graham v. John Deere.  The analogous arts test has long been thought of as part of the initial factual Graham inquiry – identify the scope and content of the prior art.  Under the doctrine as explained in Clay, the court limits the scope of prior art only to references that a worker may have been motivated to consider.  These are generally thought of as references in the same field of endeavor or addressing similar problems as those faced by the inventor.  Of course, just because two prior art references are within the same field does not mean that the worker would have been motivated to combine the elements of references in the way claimed by the inventor.  Thus, traditionally, the motivation to consider a reference is a unique and different inquiry than that of the motivation to combine the elements of multiple references.  Here, the court appears to mix them together in a way that adds to confusion in the inquiry rather than offering clarity.

Now, maybe it makes sense to throw-out the old Graham v. John Deere structured approach, but that should be an explicit process rather than a set of (perhaps-unintentional) undermining decisions.