The appeal here is somewhat complicated – as reflected by the Federal Circuit’s 42-page opinion.  The complications begin with the founding of EVE, and emulation software company founded by folks who invented emulation software at Mentor. Synopsys then acquired EVE.   EVE had previously licensed some of Mentor’s patents, but Mentor claims the license was terminated by the Synopsys acquisition.

Ending Assignor Estoppel: The jury found that Synopsys infringed Mentor’s U.S. Patent No. 6,240,376 and awarded $36 million in lost profits damages.  The district court had refused to allow Synopsys to challenge the patent’s validity based upon the doctrine of assignor estoppel.  The judge-made doctrine prohibits a patent’s seller/assignor (such as an inventor who assigned rights to his employer) from later challenging the validity of a patent in patent infringement litigation.   Here, Synopsys agreed that the doctrine applied since the inventors of the ‘376 patent had founded and continued to operate EVE that was the source of the infringement.   However, the adjudged infringer boldly asked the Federal Circuit to eliminate the doctrine (as the PTAB has done) since Supreme Court “demolished the doctrinal underpinnings of assignor estoppel in the decision that abolished the comparable licensee estoppel in Lear, Inc. v. Adkins, 395 U.S. 653 (1969).” On appeal, the Federal Circuit panel disagreed – as it must – following its own precedent such as Diamond Sci. Co. v. Ambico, Inc., 848 F.2d 1220, 1222–26 (Fed. Cir. 1988) and MAG Aerospace Indus., Inc. v. B/E Aerospace, Inc., 816 F.3d 1374, 1380–81 (Fed. Cir. 2016).  The setup here is proper for en banc or Supreme Court petition.  On Point is Mark A. Lemley, Rethinking Assignor Estoppel, 54 Hous. L. Rev. 513 (2016) (arguing that the doctrine “interferes with both the invalidation of bad patents and the goal of employee mobility”).

Indefinite: The district court held on summary judgment that Synopsis’ cross-asserted U.S. Patent No. 6,132,109 is indefinite. On appeal, the Federal Circuit reversed.  The asserted claims require a “circuit analysis visually near the
HDL source specification that generated the circuit.”  And, the district court found that the undefined term-of-degree “near” rendered the claim indefinite.

Patent law requires that the claims “inform, with reasonable certainty, those
skilled in the art about the scope of the invention.” Nautilus, Inc. v. Biosig Instruments, Inc., 134 S. Ct. 2120 (2014).  Terms of degree are certainly permissible, but the patent document must include “some standard” used to measure the term of degree.

Here, the court walked through terms of degree that have been accepted post Nautilus: “spaced relationship”,  “visually negligible”, and “look and feel” based upon the intrinsic evidence or established meaning in the art.

Here, the specification indicates that the nearness of the circuit analysis display is to allow “a designer to make more effective use of logic synthesis and reduce the complexity of the circuit debugging process.”  In addition, the specification provides several diagrams showing the analysis next to the appropriate line of code (below). These descriptions provided enough of a standard for the court to find a reasonable certainty as to the scope of the term and the claim as a whole. “[W]e hold a skilled artisan would understand “near” requires the HDL code and its corresponding circuit analysis to be displayed in a manner that physically associates the two.”  On remand, Synopsys will get a shot at proving infringement of this patent. 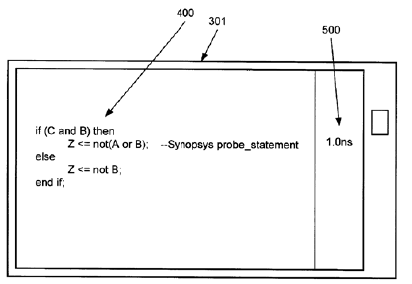 Eligibility: A separate Synopsys patent was found ineligible. U.S. Patent No. 7,069,526 (asserted claims 19, 24, 28, 30, and 33). The claims are directed to “A machine-readable medium containing instructions …”  The problem is that the patent expressly defines “machine-readable medium” to include “carrier waves” and therefore is invalid under In re Nuijten, 500 F.3d 1346 (Fed. Cir. 2007).  In Nuijten, the court held that transitory signals are not eligible for patenting because they do not fit any of the statutory classes of “process, machine, manufacture, or composition of matter.” The here court writes: “Because the challenged ’526 claims are expressly defined by the specification to cover carrier waves, they are similar to the ineligible Nuijten claims.”

Claim Preclusion: Finally, the Mentor has successfully appealed the district court claim preclusion holding as to Mentor’s U.S. Patent Nos. 6,009,531 and 5,649,176.  Back in 2006, Mentor had sued EVE for infringing the patents.  That litigation settled with Eve’s license and a dismissal with prejudice.

Here, the Federal Circuit held that claim preclusion cannot apply because the current litigation is based upon acts that occurred subsequent to the prior settlement.

Mentor’s infringement allegations are based on alleged acts of infringement that occurred after the Mentor/EVE license terminated and were not part of the previous lawsuit. Claim preclusion does not bar these allegations because Mentor could not have previously brought them.

What is a bit unclear here is how the license plays in.  The court noted that the current infringement claims are “based on post-license [termination] conduct, so the alleged infringement did not exist during the previous action.”  It is unclear how the court would deal with pre-termination conduct.

Note: The case also includes an important holdings on lost profits damages, willfulness, and written description that we’ll save for a later post.

36 thoughts on “Mentor Graphics v. Synopsys: Covering All the Bases”