Here, the claim term on appeal is “entire oscillator disposed upon [an] integrated circuit substrate” as used in Tech Properties’ U.S. Patent No. 5,809,336.  The patent is directed to a microprocessor system that has two independent clocks: A variable frequency CPU ring oscillator clock and a fixed frequency quartz crystal I/O clock.  The improvement here is in linking the variable frequency clock to the CPU so that the performance of both vary according to external stress (such as temperature) while not impacting the I/O clock speed. 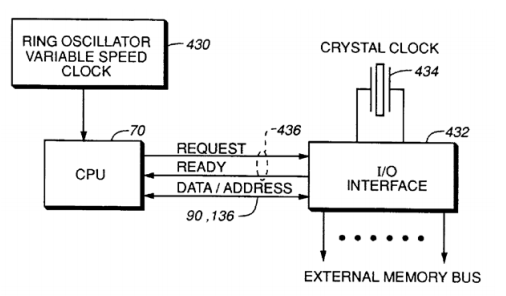 Following a Markman hearing, the district construed the oscillator term as being the variable-speed clock and requiring “an oscillator located entirely on the same semiconductor substrate as the central processing unit that does not require a control signal and whose frequency is not fixed by any external crystal.”  Although the claims do not expressly include the negative limitation of no-control-signal and no-external-crystal for the CPU, the district court found that the prosecution history showed that the patentee disclaimed scope of its claims when attempting to overcome prior art rejections.

Disclaimer: Unlike the soft and seemingly flexible approach of Phillips, any disclaimer of scope must be “clear and unmistakable.” to one of ordinary skill in the art.  Statements by the patentee that are either “ambiguous or amenable to multiple reasonable interpretations” do not create a disclaimer.  Disclaimer is big because it allows the court to permissible add limitations from the specification and prosecution into the claims.

PTO ERROR: Let me note here that – in my view – every time we have a strong prosecution disclaimer argument, we know that the PTO erred.  When the patentee made the argument that the claimed oscillator was variable-speed, the examiner should have replied: “Please amend the claims to actually include that limitation.”

No fixed-crystal-clock: During prosecution, the patentee distinguished the prior art by noting that unlike the “variable speed clock as claimed”, the prior art “is at a fixed, not a variable frequency” and “relies on an external crystal.”  For Judge Moore, these statements were sufficient to find that the patentee had disclaimed fixed-speed clocks from its entire oscillator claim scope.

The patentee noted that the disclaimer was not necessary to overcome the prior art. On appeal, however, the court rejected that factor non-determinative.  Rather, the question for disclaimer is whether the statements were “clear and unmistakable.”

[T]he scope of surrender is not limited to what is absolutely necessary to avoid a prior art reference; patentees may surrender more than necessary. . . [W]e hold patentees to the actual arguments made, not the arguments that could have been made.

Scope of Disclaimer: The district court also found that the patentee had disclaimed any use of a control-signal in its “entire oscillator.” On appeal, the Federal Circuit modified the disclaimer to an oscillator “that does not require a command input to change the clock frequency” since the patentee had disclaimed only a “particular use of a command signal” when it characterized the prior art as different sinc it included “a command input . . . to change the clock speed.”

On remand, the district court will need to decide whether this change impacts the prior non-infringement decision.

15 thoughts on “Limits on Disclaimer in Claim Construction”