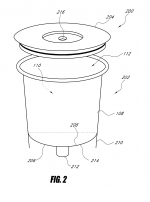 After conducting an investigation, a divided majority of commissioners of the USITC found no-violation of Adrian Rivera’s U.S. Patent No. 8,720,320 directed toward a re-usable K-cup that work with coffee pods. Investigation No. 337-TA-929.  In particular, the decision found all asserted claims invalid for lack of written description. On appeal, the Federal Circuit has affirmed — finding substantial evidence supported the Commission’s holding.

The original set of claims focused on a cup (brewing chamber) designed to hold a “pod” using a “pod adaptor assembly.” However, during prosecution, the patentee cancelled those original claims and replaced them with ones more broadly directed to a “container . . . adapted to hold brewing material.”  The expansion captured within its scope competitors who created reusable K-cups that hold loose grounds (instead of pods) that include a filter integrated into the cup.

Section 112 of the Patent Act requires the patentee to submit “a written description of the invention.”  Timing-wise, this Written Description Requirement is been interpreted require the full description at the time of filing of the application.  The difficulty for many patent applicants is that the scope of the claimed invention can change significantly during prosecution through the amendment process.  Problems arise both when patentees attempt to narrow claims to overcome prior art and also (as here) expand claim scope to capture market developments.  During prosecution, a written description problem is usually identified as improper “new matter” and is correctable.  During infringement litigation, however, a claimed invention lacking sufficient description in the specification will be found invalid and unenforceable.

The test for written description is an objective inquiry that considers whether the original specification “shows that the inventor actually invented the invention claimed.” Ariad Pharm., Inc. v. Eli Lilly & Co., 598 F.3d 1336, 1351 (Fed. Cir. 2010) (en banc).  The Federal Circuit considers written description a question of fact. This means that the appellate court gives deference to the lower court/agency determination on appeal.

Focus on the Infringement: At the litigation stage, courts (including the Federal Circuit) considering the written description requirement have a tendency to shift its gaze from the claims and instead also include the accused device in the analysis.  Here, the court looked at the accused Solofill cups that include the particular differences from Rivera’s original disclosure: (1) Solofill cups use loose grounds rather than coffee-pods; and (2) Solofill cups include a filter integrated into the cup itself.

Taking this infringement-focused approach, the claimed “container . . . adapted to hold brewing material” can only work with loose grounds if the container includes a filter of its own.  And, the patent specification does not indicate that configuration is part of the invention.  As such, the claims fail the written description requirement and therefore are invalid.

The outcome here is similar to that of ICU Medical v. Alaris Medical System (Fed. Cir. 2009) and Liebel-Flarsheim v. Medrad (Fed. Cir. 2007) (though an enablement case).

Not Enablement: One of Rivera’s failed arguments is that a person of skill in the art could quite easily make the integrated filter since they were already known in the art.  On appeal, the Federal Circuit rejected that argument — holding that this argument goes toward enablement, which is separate and distinct from written description. For its part, the purpose of the written description requirement is to prove that the inventor actually possessed the invention – and thus requires disclosure in the specification.

Omitted Element: This case is similar to other omitted element cases. In his email, Prof Wegner writes: “The patented claims were broader than all disclosed embodiments:  The claims omitted one of the features common to all embodiments of the patent application as filed.”