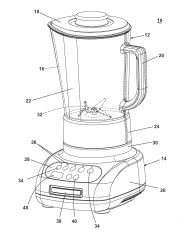 In a split opinion, the Federal Circuit  rejected the PTAB’s IPR validity judgment favoring the patentee Whirlpool — holding instead that the challenged claims are invalid as anticipated. Patent No. 7,581,688; IPR No. IPR2014-00877.  Judge Dyk penned the opinion joined by Chief Judge Prost. Judge Newman wrote in dissent.

The underlying claimed invention is an automatically pulsed blender cycle.  The basic idea is to occasionally go through a “deceleration phase” that slows the cutter blade down to a reduced “predetermined settling speed” before accelerating the blade back to the normal operating speed.  The claims require that the settling speed be “indicative of the items in the container having settled around the cutter assembly.”

The basic issue on appeal is whether the prior art (U.S. Patent No. 6,609,821 to Wulf) anticipates Whirlpool’s patent:

The Board determined that Wulf did not anticipate the ’688 patent because its disclosures did not meet the “settling speed” limitation. However, the Board did “not adopt any explicit construction of the term for [its] Final Written Decision,”

On appeal, the Federal Circuit first found that the PTAB should have construed the disputed language:

In the appeal, the appellate panel then decided to take-on the claim construction and anticipation analysis on its own. The court writes:

Given that the Board did not rely on extrinsic evidence here as to claim construction, we can determine the correct construction of “settling speed” and then determine whether the Board correctly held that Wulf does not meet the limitations of claim 1.

In my view, the court’s statement reprinted above is wrong in so many ways.  Of course the the Board did not “rely on extrinsic evidence” in claim construction — since the board “declined to provide a construction.”  Further, even when the claim construction considered is a question of law and reviewed de novo, the appellate court is still a reviewing court – not a court of first instance. Here, the court reviews substantial intrinsic evidence in making its claim construction determination, and it is merely a legal fiction that the resulting conclusions are not ‘factual interpretations’ that should be based upon more than a review of the appellate docket submissions. . . .

The actual claim construction issue here is somewhat odd – the claim language states that “the speed of the cutter assembly is reduced from the operating speed to a predetermined settling speed . . .  indicative of the items in the container having settled around the cutter assembly.”  The construction offered by the federal circuit here is that the settling speed is “slower than the operating speed and permits settling of the blender contents.”  WOW – good thing that the court provided a construction here since that wasn’t apparent from the claims.