Ultratec’s patents relate to systems for facilitating phone calls for deaf people.  In eight parallel IPR proceedings, the PTAB found the challenged claims anticipated and/or obvious.   On appeal, the Federal Circuit has vacated – holding that “the Board failed to consider material evidence and failed to explain its decisions to exclude the evidence.”   As you might expect, the panel of Judges Newman, Linn, and Moore held the PTAB’s feet to the fire.

The setup here is typical of the problematic parallel proceedings with the PTAB cancelling patents after final court judgment enforcing patent rights:

Ultratec sued CaptionCall … for infringement [and] the jury found the patents valid and infringed and awarded damages of $44.1 million. Five months after the verdict, the Board issued final written decisions holding all challenged claims of Ultratec’s patents were either anticipated or would have been obvious. The district court subsequently stayed all post-judgment proceedings pending final resolution of the IPRs.

The particular issue here involves the patent challenger CaptionCall’s expert witness Benedict Occhiogrosso who provided testimony both for the court proceedings and for the IPR.

One week after the court trial, the patentee Ultratech attempted to introduce Occhiogrosso’s trial testimony into the IPR proceedings to show conflicts between the two – but the PTAB repeatedly blocked that attempt without ever reviewing the trial testimony. Ultimately, the PTAB issued a final decision crediting Occhiogrosso’s credibility for its final conclusion of unpatentaiblity.

When the patentee first attempted to introduce the original trial testimony, its request was denied because Ultratech had not followed the rules of first requesting authorization to file a such motion. 37 C.F.R. § 42.123(b).  Subsequently, Ultratech did request authorization, but that request was denied (orally) without the Board ever reviewing the conflicting testimony since, under PTAB rules, the request may not include information related to the supplementary evidence.   The PTO solicitor’s office then refused to include the full documentation regarding these submissions in the ‘official’ record submitted to the Federal Circuit. 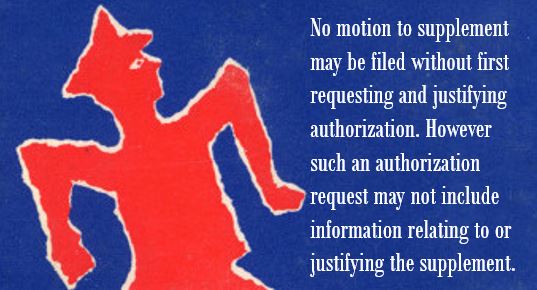 On Appeal, the Federal Circuit found that the Board had abused its discretion in refusing to supplement the record:

This record affords but one reasonable conclusion: Ultratec satisfied both of § 42.123(b)’s requirements for allowing Ultratec to file a motion to admit Mr. Occhiogrosso’s trial testimony. First, the evidence could not have been obtained earlier. Ultratec emailed the Board requesting authorization to file a motion to supplement the record the week after the jury trial concluded. This is not evidence that could have been located earlier through a more diligent or exhaustive search; it did not exist during the IPR discovery period. . . . The Board offers no reasoned basis why it would not be in the interest of justice to consider sworn inconsistent testimony on the identical issue. . . . Ultratec sought to offer recent sworn testimony of the same expert addressing the same patents, references, and limitations at issue in the IPRs. A reasonable adjudicator would have wanted to review this evidence. If Mr. Occhiogrosso gave conflicting testimony on cross-examination, this would be highly relevant to both the Board’s analysis of the specific issues on which he gave inconsistent testimony and to the Board’s overall view of his credibility. Mr. Occhiogrosso’s testimony was critical to the Board’s fact findings in this case, as the opinions’ repeated reliance on it establishes. Under such circumstances, no reasonable fact finder would refuse to consider evidence of inconsistent sworn testimony. Moreover, any such inconsistencies would likely bear on the overall credibility of the expert. . . . Admitting and reviewing Mr. Occhiogrosso’s trial testimony would have placed minimal additional burden on the Board.

The first problem is that the rules suggest that the Board will decide motions to request a supplement without “the information necessary to make a reasoned decision.”  Basically, the problem is the required request to file a motion to supplement may not include any discussion of the content of what is to be supplemented — this means that the request may be denied (as here) without the Board ever reviewing the information. “The Board’s only exposure to the disputed testimony was the parties’ competing characterizations of it during the conference call for which there exists no record.”

The second problem is that “the Board’s procedures allowed it to make significant evidentiary decisions without providing an explanation or a reasoned basis for its decisions.”  This violates general principles of administrative law.

The third problem is that the Board’s procedures impede appeals by keeping meaningful information out of the record. For instance, the appellate court writes “We are also prohibited from viewing Mr. Occhiogrosso’s testimony because it is not part of the record.”

Unfortunately, although the Federal Circuit identifies problems with various PTAB rules and procedures, the Court did not expressly hold that those rules must be revised.  Rather, the holding is simply:

36 thoughts on “PTAB Ducks the Record, but not the Judge Moore”