Guest post by Renjun Bian.  Ms. Bian is a J.S.D. candidate at UC Berkeley School of Law, where she conducts research on Chinese patent law and policies. Her dissertation focuses on patent litigation and valuation. Before coming to Berkeley, Ms. Bian studied Chinese law at Peking University, where she earned an LL.B.  Ms. Bian also holds an LLM from Berkeley and interned at King & Wood Mallesons’ Silicon Valley office.  The opinions expressed are her own.  Below, she describes findings from her forthcoming article in the Berkeley Technology Law Journal.

As the Chinese government continues to stimulate domestic innovation and patent activities via a variety of policies, China has become a world leader in both patent applications and litigation. These major developments have made China an integral venue of international patent protection for inventors and entrepreneurs worldwide.

However, due to the lack of judicial transparency before 2014, we had virtually no access to Chinese patent litigation data and knew little about how Chinese courts adjudicated patent cases. Instead, we were left with a variety of impressions and guesses based on the text of Chinese law and the limited number of cases released by the press; for example, that Chinese courts have a strong bias toward domestic companies over foreign ones, to protect the local economy; that injunctions, either preliminary or permanent, are difficult to obtain under Chinese law; that monetary damages granted by Chinese courts are extremely low, and insufficient to compensate patent holders; etc.

Taking advantage of ongoing judicial reform in China, including mandated public access to all judgments made since January 1, 2014 via a database called China Judgements Online (CJO), I wrote a paper called “Many Things You Know about Patent Infringement Litigation in China are Wrong” in 2016 (available at SSRN: https://ssrn.com/abstract=3063566). It analyzes 1,663 patent infringement judgments – all publicly available final patent infringement cases decided by local people’s courts in 2014, and surprisingly finds out that most of the long-standing beliefs about patent enforcement in China cannot be supported by empirical data. 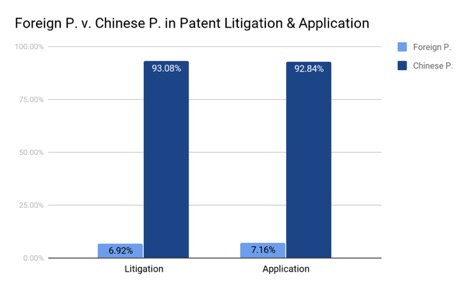 Not surprisingly, the overwhelming majority of patent infringement cases in China (93.08%, or 1,548) were litigated by Chinese patent owners or licensees. Foreign plaintiffs accounted for only 6.92% (115) of 1,663 decisions included in the population. This percentage – although it seemed intuitively low – represented the ratio of patents granted by SIPO to international patent applicants. According to statistics released by SIPO, 93,285 patents were issued to foreign individuals and entities in 2014, making up approximately 7.16% of all 1,302,687 patents granted by SIPO that year.

Why did foreign patentees not fear enforcing their patent rights in China as the conventional wisdom suggested? The answer may be surprising: plaintiffs fared better than domestic Chinese patent holders. They had a higher win rate, injunction rate, and average damages:

Foreign plaintiffs were more likely to win and receive injunctions than their Chinese counterparts in patent infringement cases brought in China. Moreover, damages awarded to foreign patent owners (￥201,620.45, or US$32,837.21) were almost three times higher than those awarded to Chinese patent owners (￥66,217.93, or US$10,784.68). The important implication here is that Chinese courts, while not preferring foreign parties to domestic ones, certainly did not protect the local economy at the expense of foreign companies in practice.

I have also looked into many other legal and extra-legal factors in that paper and tested how the outcome of patent infringement cases – the finding of infringement, the granting of injunctions, and the awarding of damages – in China can be explained on the basis of these factors. Some of my key findings are summarized below:

(1) Plaintiffs won in 80.16% of all patent infringement cases included in the population. Such a win rate was higher than its counterparts in many major countries – Germany (approximately 66%) and the United States (approximately 60%), for example.

(2) In China, permanent injunctions were automatically granted in most cases (93.76%), based on a finding of infringement.

(4) Design patents were overrepresented in infringement litigations in China, indicating that design patent owners are more likely to enforce their patents after issuance than owners of invention patents and utility models.

(5) The overwhelming majority of patent infringement lawsuits in China involved mechanical patents (84.64%). Electrical (13.79%) and chemical (1.57%) patents made up only a rather small portion of all decisions.

(6) On average, patent owners had waited for approximately half of the protection term of their patents (48.15% for invention patents, 65.60% for utility models, and 45.50% for design patents) before enforcement.