Previously, I published a study which set out to determine how examiners issued patent applications. This original study focused only on issued patents, and coded over 1.5 million patents issued January 2001-July 2011. The main limitation on this study was that it focused only on allowed patents. Accordingly it suffered from a “denominator” problem. Specifically, it was difficult to determine how examiners actually behaved without knowing how many pending applications they had in their docket, as well as how many applications went abandoned.

Six years later, I have followed up on this study by collecting information regarding not only the examiners’ issued patents, but their abandoned patents as well as the total number of office actions issued by every examiner with an active docket as of June 2017. Using LexisNexis PatentAdvisor, we were able to pull the dockets of all active examiners (every examiner with a pending application as of June 8, 2017). Accordingly, this study captures 8,537,660 office actions, 2,812,177 granted patents and 1,255,552 abandonments from 9,535 examiners including from January 1, 2001 to June 8, 2017.

This new dataset is both more detailed and more narrow compared to my previous study. However, I believe, this information is more useful to practitioners today because it shows what is going on at the office at this moment in time. It excludes previous examiners who have retired or are no longer at the PTO. These data exclude examiners with any pending training academy cases (Technology Center 4000) in their active docket. Accordingly, these data filter out the most junior examiners.

As shown in Figure 1, overall, there is a wide range of OGR scores across the United States Patent & Trademark Office (USPTO), commonly ranging from approximately 0.2 to 23. Furthermore, overall, most examiners have an OGR of 3.0 or below. Examiners with training academy cases (Technology Center 4000) have been filtered from these data. 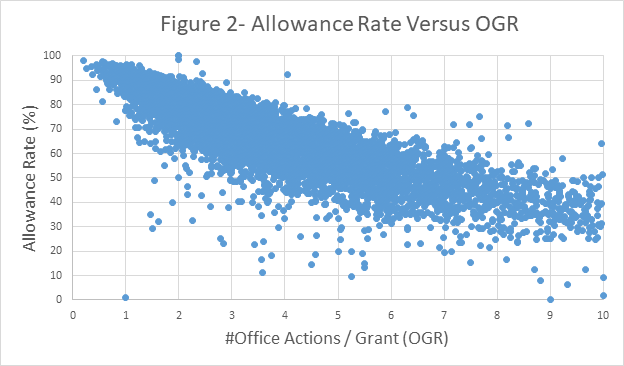 Interestingly, when broken down into Workgroups, this study finds that there can be large variation in OGR scores. For example, Figure 3 shows that in Technology Center 1700 (Chemical and Materials Engineering), Workgroup 1780 (Food, Miscellaneous Articles, Stock Material) has a disproportionate number of examiners with high OGR scores when compared with other Workgroups within 1700. In contrast, Workgroup 1750 (Solar Cells and Electrochemistry) has a disproportionately high number of examiners with low OGR scores when compared with other Workgroups within 1700. Similarly, in Technology Center 3600, Workgroups 3620 and 3680 have many examiners with high OGR scores, which is unsurprising since both Workgroups encompass “Data Processing: Financial, Business Practice, Management, or Cost/Price Determination” or business methods type applications. 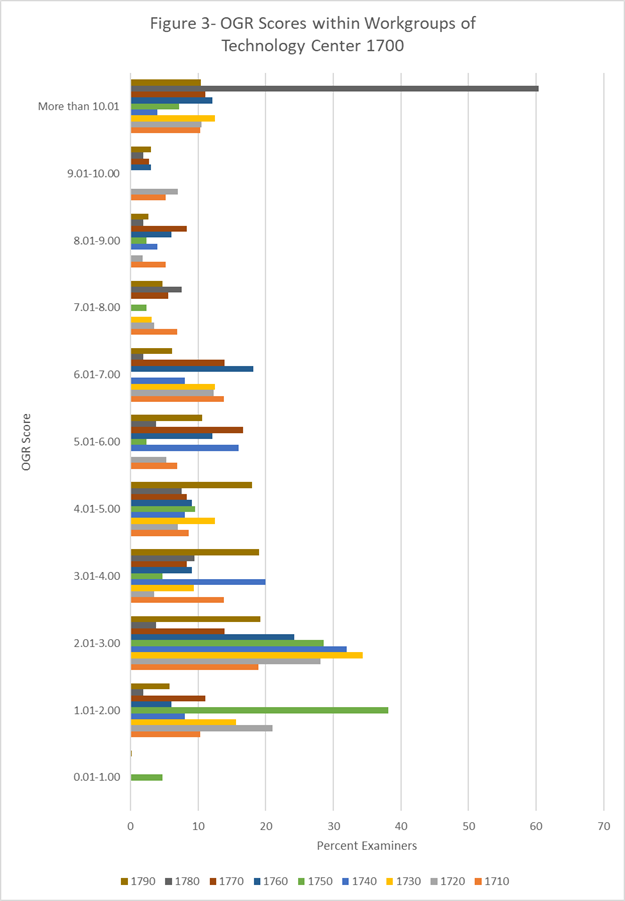 This paper confirms many of the findings from my previous study. Specifically, junior examiners have a much lower allowance rate and a much higher OGR score than their more experienced counterparts. This is unsurprising since junior examiners will have written only a few Office Actions (usually less than 500) and have only allowed a few cases. However, this study also goes much further than my previous study. By looking at allowances and abandonments as a function of Office Actions written, we can get an idea of the general rate of patenting at the patent office and how these rates differs among different technology centers, workgroups and art units. This study shows how examiners spend their time, either writing office actions or allowing cases.

This study focuses on overall patent office trends as well as trends at the technology center and workgroup levels.  PatentAdvisor’s “Examiner Time Allocation” metric can also be used to forecast the time and expense required to obtain a patent and is based on each specific examiner’s body of work.

As with my previous study, I note that there is no “ideal” patent allowance rate. It is possible that both populations of examiners with low and high OGR scores are doing an excellent job of rejecting “bad” patents and allowing “good” patents. This study gives insight into how “average” examiners behave in a particular technology group. One argument may be that examiners who are two or three standard deviations from this “average” should be scrutinized at a higher degree.

A full draft of “Office Actions per Grant Ratio (OGR): A New Metric for Patent Examiner Activity” is available on SSRN at: https://papers.ssrn.com/sol3/papers.cfm?abstract_id=3100326.