In Energy Heating v. Heat On-The-Fly, the Federal Circuit affirmed the lower court’s holding that Heat On-The-Fly’s U.S. Patent No. 8,171,993 is unenforceable due to inequitable conduct.

The underlying invention involves a portable system for preparing a heated water and proppant (e.g. sand) mixture for use in hydraulic fracing.  Mr. Hefley, sole inventor and founder of Heat On-The-Fly, filed his priority provisional patent application back in September 2009 that eventually led to the ‘993 patent. 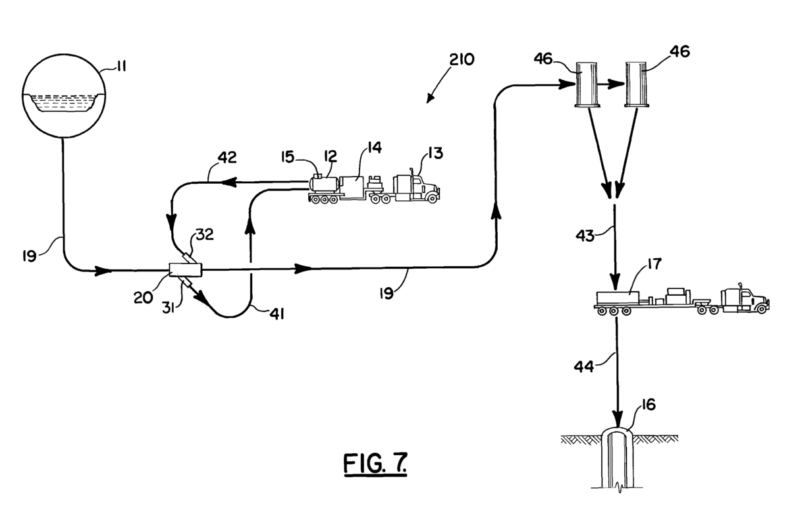 The problem:  By September 2008 (one year before filing), Heafly and his company had provided his services to dozens of “frac jobs” — collecting almost $2 million in revenue.

Those pre-filing jobs were not disclosed to the USPTO while the ‘993’s application was pending – even though they appear quite material under 102(b) (Pre-AIA).

Inequitable Conduct: In the failure-to-disclose context inequitable conduct requires clear and convincing evidence that “the applicant knew of … the prior commercial sale, knew that it was material, and made a deliberate decision to withhold it.” See Therasense.  These issues are determined by the district court judge and given deference on appeal.  Thus, an inequitable conduct finding should only be overturned when based upon a misapplication of law or based upon a clearly erroneous finding of fact.

Here, the patentee argued that the prior uses were “experimental” or at least he thought that they were.  That argument was rejected since the prior uses included all elements of claim 1; that there were no notebooks or other experiment-like-paraphernalia; and that the uses were done openly without any attempt to hide the system or require confidentiality. (Linking these factors to Allen Engineering Corp. v. Bartell Industries, Inc., 299 F.3d 1336 (Fed. Cir. 2002)).  Those elements were more than enough to overcome the experimental-use-defense.

On Attorney Advice: The court also affirmed that Hefley knew of the materiality. On this point, the interesting twist involve’s Hefley’s patent attorney Seth Nehrbass.  Nehrbass was not permitted to testify at trial — but would have apparently testified that the non-disclosure was on attorney advice:

This testimony might have saved the patent from the inequitable conduct finding.  However, it was properly excluded on prejudice grounds. In particular, up until just before trial Hefley had asserted attorney-client-privilege (including during the Nehrbass and Hefley depositions).  Then, just before trial, Hefley attempted to raise the attorney-advice defense.

Inequitable conduct affirmed.  Because inequitable conduct wiped-out all of the patented claims, the court did not reach the other patent questions of “obviousness, claim construction, and divided infringement.

Tortious Interference: The jury also found that HOTF was liable for tortious interference.  The facts:

On appeal, the Federal Circuit has affirmed — finding that the evidence presented were sufficient to meet the subjective and objective bad-faith element required to support a tort claim based upon enforcing a patent.  See Adept, Inc. v. Murex Sec., Ltd., 539 F.3d 1354 (Fed. Cir. 2008).

Attorney Fees: Finally, the district court denied the prevailing party attorney fees under Section 285.  That judgment was vacated with a strong suggestion that this is an exceptional case.