I’m personally drawn to PHOSITA’s exact match to the statutory language of section 103, and I see capital “H” as strong and stable letter.  At the same time, I can understand why a party wanting to bolster the credibility the fictitious artisan might prefer POSITA since POSA suggests a “poser” with a Trans-Atlantic accent and the PHO beginning of PHOSITA also suggests falsity.

For its part, the Supreme Court has not used any of these abbreviations. At the Federal Circuit, most obviousness decisions also don’t use any of the abbreviations.  However, Judge Wallach regularly uses PHOSITA and Judge Reyna tends to use POSITA.  Several judges have also referred to a POSA, but almost always in the context of quoting a district court or expert opinion.   I don’t find any reference to PSITA in court cases.

The chart below shows that the PTAB’s favorite is POSITA with 68% of the cases having abbreviations.  Still, most PTAB cases just spell out the rule without any abbreviation at all. 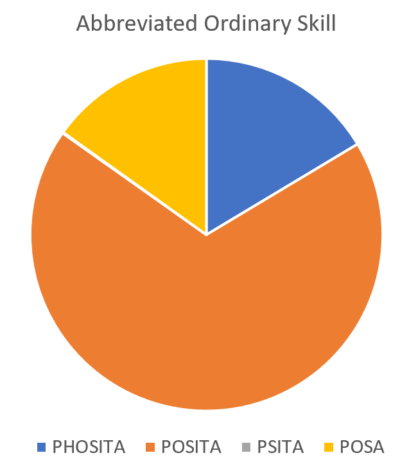 With the PTAB’s trend so strongly toward POSITA, I’m going to reconsider my PHOSITA habit and try out POSITA for a few months to see if it fits.  Of course, I am still sour about my P-Tab loss (I was calling for P-T-A-B).

75 thoughts on “Person (Having) Ordinary Skill in the Art”