In a split decision, the Federal Circuit has sided with the patentee Dr. Barry — affirming the induced infringement and $17 million damages judgments as well as several determinations regarding the public-use and on-sale statutory bars. The patents here are directed to spine surgery methods that involve large screws drilled into the spine. U.S. Patent Nos. 7,670,358 and 8,361,121. 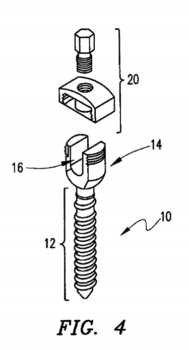 The dissenting opinion by Chief Judge Prost offers a concise explanation of a primary issue in the case:

The facts are simple. More than one year before filing for the ’358 patent, Dr. Barry successfully performed his claimed surgical method on three different patients, charging each his normal fee. Dr. Barry’s method was thus prima facie “on sale” or in “public use” before the critical date under 35 U.S.C. § 102(b) [pre-AIA].

The majority added to these facts — that Dr. Barry was not satisfied that his method worked well enough until follow-up testing that occurred after the third surgery.

Here, the patented invention is a method — and so cannot really be “on sale.” In addition, Barry’s pre-critical-date performance of the method was within the surgical rule where HIPAA and other privacy rules ensure that the method was not publicly used. However, one conflict was the extent that Barry was commercializing the the invention — with the idea that commercialization counts as a public use.  In a footnote, the Court concludes that he did not “exploit” his invention prior to the critical date since he charged the same for his new surgery has he did for the old.

Though earning his normal fees from the three surgeries [likely $$$$$], Dr. Barry did not “exploit” his invention as a means to attract the three patients for those surgeries or to charge more because he used his new technique. The jury could find that he would have gotten the same business, and earned the same fee, even if he had not planned to use or used the inventive process.

There are a number of major problems with this conclusion from the court — likely enough to fill a law review article.

43 thoughts on “Reduced to Practice, but Not Yet Ready for Patenting”