Claim-construction used to be the bread-and-butter of Federal Circuit decisions.  That standard was of course upset by the onslaught of eligibility decisions from district courts and BRI obviousness cases out of the PTAB.

The patents at issue here all relate to circuit board construction – and dealing with the problem of delamination. The claimed solution is uses “a unique surface structure . . . comprised of teeth that are preferably angled or hooked like fangs or canine teeth to enable one layer to mechanically grip a second layer.” The figure below from the patent provides an example of how the layers might fit together. 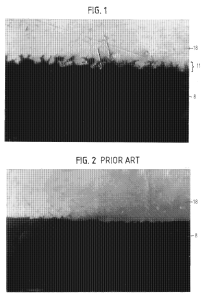 The toothy layers can be formed in various ways — etching

Step 6, as discussed subsequently in greater detail, involves the etching cavities, veins, openings, or gaps in the applied dielectric material 8, or more particularly an outermost surface thereof, to accommodate the teeth. One technique for forming the teeth is somewhat similar to what has been known as the swell and etch or desmear process, except that contrary to all known teachings in the prior art, in effect, a “double desmear process” is utilized.

During prosecution, the patentee also explained that the invention uses “two separate swell and etch steps” to form the teeth.  However, the claims themselves do not expressly require the double pass process.

In the first decision in this case, the district court considered the claims, specification, and prosecution history and found that the claims should be interpreted to require a double pass — even though not expressly required by the claims. Because the accused infringers only used a single-pass, non-infringement was then an easy finding.

On appeal,  the Federal Circuit has rejected the narrow claim construction.  As is its process, the court began with the claim language — finding that ” at least based on the plain language, the claims are not limited to a repeated desmear process.”  Moving then to the specification, the court found no “clear and unmistakable disclaimer” of the claim scope covering a single-pass method.  For the court here, the deciding factor appears to be the patent attorney’s care in drafting the specification. Here, the specification calls double desmear “one technique” that the invention “can be carried out” and “for example” rather than calling the approach “the invention.”

This approach here is properly seen as a patent drafting trick rather than an improved disclosure or invention.  We know this because, although the specification called its double-pass approach “one technique” it did not describe any other technique — except for the prior art single-pass technique that the specification bemoaned as inferior.

Still, the Federal Circuit sided with the patentee and found that the words of ambiguity sufficient to avoid a claim scope narrowing.

Heeding the warning in Phillips to keep in mind that a goal of the specification is to provide a best mode to make and use an invention, phrases such as “one technique,” “can be carried out,” and “a way” indicate that using Probelec XB 7081 is only one method for making the invention and does not automatically lead to finding a clear disavowal of claim scope. We have also “expressly rejected the contention that if a patent describes only a single embodiment, the claims of the patent must be construed as being limited to that embodiment.” Id. . . . Additionally, distinguishing the double desmear process as “contrary to” or “in stark contrast” with the single desmear process, which again appears within the context of disclosures of the preferred embodiment, are not clear and unmistakable limiting statements. We have held that “[m]ere criticism of a particular embodiment . . . is not sufficient to rise to the level of clear disavowal.”

I’ll note that this decision is an example of the rhetorical approach of disassembly.  After the appellee pointed to ten different reasons for limiting claim scope, the court walked through each one individually — and concluding that each offered “mere” subtleties and not a “clear disclaimer.” The court did not consider the impact of the whole.  This is an easy criticism of the court’s decision, but the reality is that the court is now in a tough position.  I would have also criticized the decision if it had gone the other way (which it could have based upon an alternative statement of the case and reading of precedent).  The bigger problem here is that we need to step back and repeatedly ask – how can we build up this system in ways that truly encourage beneficial innovation and do not simply encourage extensive lawyering. This case is also a clear failure of the examiner who was told by the patentee that a particular aspect of the innovation was important, but then allowed the patent to issue without requiring that it be expressed in the claims.

60 thoughts on “Words of Ambiguity in Specification Save patent Scope”