Back in 2017 iRobot (maker of the Roomba) complained to the USITC about infringing autonomous vacuums being imported into the US.  The patentee won on some grounds, but lost on others.

This appeal focuses on iRobot’s U.S. Patent 9,486,924 which allows for scheduling of the cleaning via mobile phone.  After conducting its investigation, the ITC found no infringement.  A divided appellate panel has affirmed.

The issue on appeal is claim-construction.  The claims include a requirement that a phone user transmit certain “instructions” to the cleaning robot.

1. A method of cleaning a room, the method comprising:

wherein executing the cleaning operation in the room according to the schedule comprises:

leaving a stationary charging device at which
the cleaning robot is docked according to the
schedule, and

navigating about a floor surface of a room.

The question in the case is whether those “instructions” can simply be schedule information, or must they be machine executable code.

iRobot argues that its proposed construction could include, for example, a simple instruction to begin the cleaning cycle.

On appeal, the Federal Circuit rejected that approach and instead held that “instructions” must be computer executable code. The patent here does not define “instructions” one way or the other and so perhaps this is an OK conclusion albeit somewhat narrow.  The court notes that the claims at issue here are considerably narrower than those found in a parent application — those original claims did not include the “instruction” limitation.  One problem not addressed here

The majority opinion was penned by Judge Dyk and joined by Judge Mayer.  Judge Bryson wrote in dissent:

The problem resides principally in a single claim term, the word “instructions.” Unfortunately, that term appears for the first time in the claims (except for two usages in an entirely different context in the specification), and the meaning of the term is therefore not immediately apparent. . . . I would read the term as having a non-technical meaning such as “directions,” “commands,” or “orders.”

Judge Bryson’s approach here fits better with my reading of the patent document itself since there is no enablement or description in the patent itself of how the phone would be sending computer code to the iRobot.  Still, I don’t have much sympathy to a patentee in this case who added new and not-defined limitations into a continuation application. 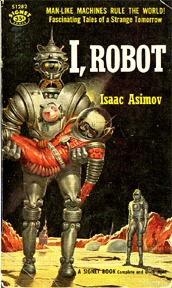 At its core, the dispute between the majority and dissent is about the intelligence of the “cleaning robot.”  If the device is an AI-enabled robot then Bryson’s opinion makes lots of sense because the device will be able to understand lots of commands.  On the other hand, a lower-level electronic device may need more technical instructions in order to guide its progress.

66 thoughts on “How Smart is your Cleaning Robot?”