In the inter partes review (IPR), the Patent Trial & Appeal Board (PTAB) sided with the patentee Infobridge — concluding that the purported prior art was not sufficiently publicly accessible prior to the patent’s November 7, 2011 filing date (and therefore not prior art).  On appeal, the Federal Circuit has rejected that decision — holding that the PTAB “applied the wrong legal standard in assessing public accessibility.”

The reference at issue is “Working Draft 4 of the H.265 standard” (WD4) which was developed by an MPEG group known as the Joint Collaborative Team on Video Coding (“JCT-VC”).  The information included int he reference was discussed at a July 2011 meeting in Torino that included about 250 participants including both academics and corporate representatives. WD4 then written and uploaded to the JCT-VC website on October 4, 2011 as one of hundreds of documents listed on the Torino meeting sub-page. The documents are in no apparent order and when printed run 48 pages long. (The relevant page is listed below, can you find our reference of interest?). 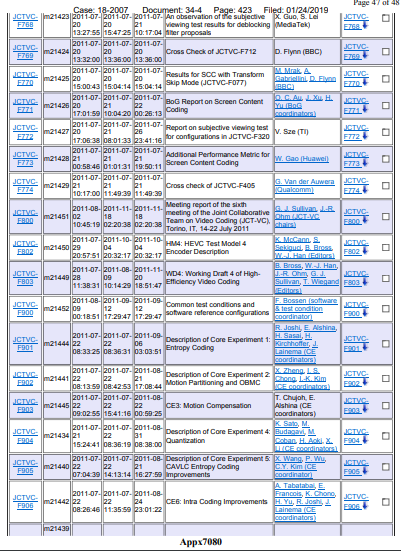 WD4 was also uploaded to an MPEG website on October 4, 2011, but required a password to access.  Also, the same day the WD4 lead author posted a link to the document to a listserve that included JCT-VC members and other interested individuals.

A publication must be either actually distributed or else made publicly accessible.  Courts ask “whether a person of ordinary skill in the art could, after exercising reasonable diligence, access a reference.”  If so, then it is a publication.

Level of Access: In its decision, the Board found no evidence to show that “WD4 was accessible to anyone other than members of JCT-VC” because the websites were too complicated and unorganized. Regarding the listserve, the Board found that the “other interested individuals” testimony to lack credibility and found it  “nothing more than conjecture and speculation.”  The board – in essence – found no evidence that the WD4 document “was generally disseminated to persons interested and ordinarily skilled in the art.” As such, the Board held that the reference should not be considered prior art as of its 2011 date.

Distribution within the Group: Samsung argued that the JCT-VC group should be considered analogous to an academic conference and that distribution within the group should count as publication.  “JCT-VC was composed of more than 250 members who were skilled artisans” in the relevant video coding art.  On appeal though the Federal Circuit rejected this argument — holding that publication requires distribution beyond the creators of the document.  ” [A] work is not publicly accessible if the only people who know how to find it are the ones who created it” — even if those people are a loose standard setting organization of 250 global experts.

Email Listserv Distribution: The patent challenger was able to gain traction with its listserv argument by showing public accessibility.

The Board departed from this well-established principle by repeatedly faulting Samsung for not proving that the WD4 reference was “generally” or “widely” disseminated. …[A] limited distribution can make a work publicly accessible under certain circumstances.  But the Board’s analysis stopped short of considering whether those circumstances were present here. The Board also faulted Samsung for failing to show that the email recipients “represented a significant portion of those interested and skilled in the art.” That was not Samsung’s burden. The Board’s decision to reject Samsung’s evidence because it did not establish that enough interested and ordinarily skilled artisans actually obtained the WD4 reference was therefore erroneous.

Rather than requiring Samsung to prove that persons of ordinary skill actually received the listserv email, the Board should have considered whether Samsung’s evidence established that an ordinarily skilled artisan could have accessed the WD4 reference, after exercising reasonable diligence, based on the listserv email. This might include examining whether a person of ordinary skill, exercising reasonable diligence, would have joined the listserv. It also might include considering the circumstances of the email itself, for example why the email was sent and whether it was covered by an expectation of confidentiality. Because the record is not clear on these factual questions, we decline to resolve them in the first instance on appeal. In particular, we are reluctant to assume that an email among potential collaborators should be treated the same as a public disclosure without clear findings by the Board. Accordingly, we vacate the Board’s finding that Mr. Bross’s email did not make the WD4 reference publicly accessible and remand so that the Board can consider this issue after applying the correct legal standard.

On remand, the PTAB will reconsider these issues — and likely find again that the listserv distribution was not sufficiently public.