Al Johnson’s registered trade dress “consists of goats on a roof of grass.” 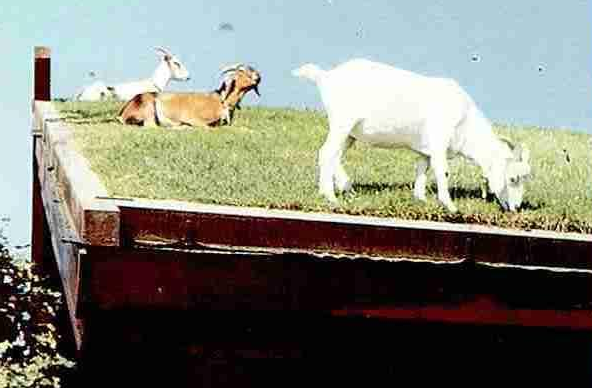 In the case, Mr. Bank petitioned to cancel the mark registration.  Bank is not a competitor or customer. Rather, Mr. Bank is offended by the way that the mark demeans goats — denigrating the value that he (and society) places on the “dignity and worth of animals.”  On the merits, Bank argued that the mark is functional and also disparaging to animal lovers. This second theory is no longer viable (if it ever were) under Matal v. Tam.

The patent statute allows for any person to raise an inter partes review (IPR) challenge of an issued patent.  Trademark cancellation petitions are more limited — requiring the petitioner to “believe[] that he is or will be damaged” by the mark.  Although the “belief” requirement appears quite broad and subjective, the court has created objective standards of reasonableness — requiring (1) a “real,” “legitimate,” and “personal” interest in the proceedings and (2) a “reasonable basis” for the belief of damage.

Here, the TTAB and CAFC agreed that Mr. Bank lacks standing. The court held that Mr. Bank provided neither a real interest nor a reasonable basis for his belief of damage.

Regarding reasonable basis, the court noted that being offended by a mark is unlikely to count as a recognized damage under Tam.

While Mr. Bank asserted that the trade dress “is offensive to numerous persons,” including himself, because it was demeaning to goats, he failed to articulate how this reason survives Tam.

AJ Johnson also asked for its cost and attorney fees for defending the appeal.  In response to that request, Bank also requested that AJ Johnson be required to pay his costs.  On appeal, the court sided with the mark holder — finding the appeal (and Bank’s request for fees) to be frivolous and awarded fees under Fed. R. App. P. 38 (“If a court of appeals determines that an appeal is frivolous, it may, after a separately filed motion or notice from the court and reasonable opportunity to respond, award just damages and single or double costs to the appellee.”).

Swedish Restaurant explains that because Mr. Bank petitioned the TTAB three times on this matter, all of which were dismissed for lack of standing, and appealed the final decision to this court, where the case was “frivolous as filed and frivolous as argued[,]” damages are warranted. . . . We conclude that this appeal and Mr. Bank’s motion for sanctions are frivolous. Mr. Bank filed multiple petitions with the TTAB regarding the Goats on the Roof Registration, all of which were dismissed for, inter alia, standing. Mr. Bank was afforded the opportunity to revise his petition and remedy the standing defect, which he did not do. Despite the fact that Mr. Bank was informed by the TTAB that his disparagement claim was based on an unconstitutional and stricken section of the Lanham Act, he raises it again before this court. Based on these facts and our analysis, Mr. Bank’s appeal is frivolous. . . . Even though Mr. Bank appears pro se before us, he is an attorney and bears the commensurate obligations. Id. at 1583 (concluding that, even when an attorney appears pro se, he or she is “chargeable with knowledge of . . . our rules”).

Accordingly, we grant Swedish Restaurant’s motion for costs and attorney fees, including the costs and fees incurred in relation to the parties’ sanctions motions, and deny Mr. Bank’s motion for sanctions.

Back in 2009, the Swedish Restaurant sued Georgia based Goats on the Roof.  The case settled, and according to a WSJ article, the Georgia facility agreed to pay a licensing fee. The article goes on to say:

Al Johnson’s is on constant lookout for other cloven-hooved intellectual-property violations.

Lars Johnson Has Goats on His Roof and a Stable of Lawyers to Prove It. Apparently Goats on the Roof of the Smokies also has a licensing agreement.

The concept of having live goats on a roof dates back 40 years to the legendary Al Johnson’s Swedish Restaurant in Door County, Wisconsin. The Johnson family began letting goats graze on the sodded roof of their Sister Bay, WI eatery to attract crowds, and boy has it worked well for them. Four decades later, the restaurant is still going strong, and the goats (and the Swedish pancakes) are as popular as ever.

Now, thanks to a licensing agreement with the restaurant, our Pigeon Forge attraction is able to share the same fun and unique feature with visitors to the Great Smoky Mountains.

Todd Bank is interesting. He self identifies as “the annoyance lawyer.” If Bank wants to try for Round 4, he should probably find folks who have received the cease-and-desist letter and represent them.

10 thoughts on “Goats Remain on the Roof”