An obvious “problem” with tax-deferral schemes (such as a retirement plan) is that Government officials would like to spend the money already.  Mark Greenstein has the solution – monetizing the taxes-owed.  Essentially the government could sell the right to collect the future taxes just like you might sell-off accounts receivables or unpaid invoices.  Because the state has powerful collection mechanisms, the particular approach here is that the Gov’t still collects the taxes and then forwards the money to the investors.

Greenstein’s pending patent application claims this approach.  Although the claims are a bit unclear, it looks like he intends to roll-up the future taxes into a couple of different funds with “which provide rates of return based on factors which are different from each other.” 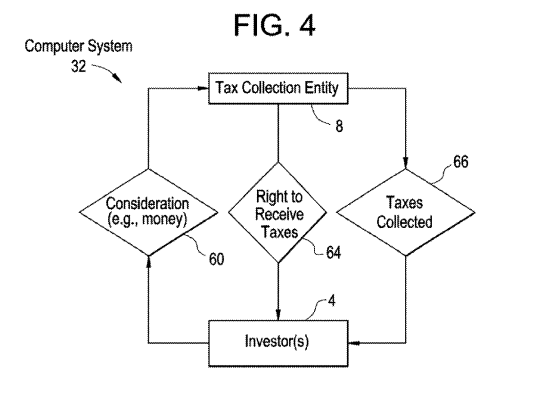 Claims were rejected on eligibility – abstract idea. The PTAB explained:

On appeal, the Federal Circuit has affirmed –agreeing that the claims use of technology is too abstract — simply using “generic computer elements to perform generic computer functions.”  Greenstein argued that his methodology new, complex, and specific.  However, the PTAB and Federal Circuit agreed that neither the novelty nor complexity solve “the problem of abstractness. . . . [T]he complexity of this known method does not impart patentability to computer-implementation of the method.”

1. A [computerized] method … to manage the sale of taxes received by reason of removal of amounts from tax-deferred vehicles, the method including a specification of the measure of the taxes which are sold;

using one or more computers to track amounts contributed to and withdrawn from such tax-deferred vehicles;

adjusting the amount owed to purchasers of taxes received by reason of removal from tax-deferred vehicles to take account of subsequent withdrawals and contributions to the tax deferred vehicles;

adjusting the amount payable of taxes which are sold to take account of subsequent withdrawals
from and contributions to the tax-deferred vehicles;

specifying an adjustment to take account of a change in tax rates;

adjusting the amount owed to purchasers of such taxes to take account of any specified adjustment in tax rates;

using one or more computers to divide the rights to receive the adjusted amount payable of such taxes sold into qualitatively different interests which provide rates of return based on factors which are different from each other;

tracking the ownership of such different interests;

receiving amounts payable of such taxes which amounts are adjusted to take account of withdrawals from and contributions to the tax deferred vehicles;

transferring the amounts due to the owners of the qualitatively different interests which provide rates of return based on factors which are different from each other.